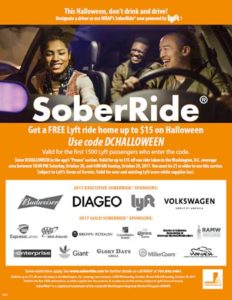 Anyone out and about in Arlington County or elsewhere in the D.C. area on the Saturday night before Halloween can get a free ride home thanks to a regional nonprofit.

The Washington Regional Alcohol Program will offer free rides with car-hailing app Lyft from 10 p.m. on Saturday, October 28 until 4 a.m. on Sunday, October 29, as part of its 2017 Halloween SoberRide program.

During this six-hour period, area residents over the age of 21 celebrating with alcohol may open the Lyft app and enter the code DCHALLOWEEN in the “Promo” section to receive their no cost (up to $15) safe transportation home. The SoberRide code is valid for the first 1,500 Lyft users who enter it.

SoberRide’s goal is to discourage drunk driving and to try to keep local roads safe from impaired drivers on or around certain holidays in which drunk driving crashes increase.

The SoberRide program is offered on St. Patrick’s Day, Cinco de Mayo and Independence Day. It will also be available during the winter holidays from December 15 through New Year’s Eve. In March, WRAP announced it would partner with Lyft for the service, switching from local taxicabs.

“Lyft is proud of the role ridesharing has played in reducing impaired driving across the nation,” Steve Taylor, general manager of Lyft Washington, D.C., said in a statement. “Here in the D.C. area, partnering with the Washington Regional Alcohol Program allows us to take our commitment to providing safe, convenient, and affordable transportation a step further, particularly during times of the year when people are out celebrating and in need of a ride home.”

END_OF_DOCUMENT_TOKEN_TO_BE_REPLACED

More Stories
In One Clarendon Office, Multiple People Have Been Struck By Cars RecentlyAsk Eli: What Are The Biggest Mistakes Sellers Make?