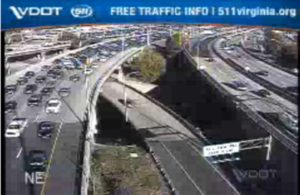 A multi-vehicle crash closed two southbound lanes of I-395 at the start of the evening rush hour today (Tuesday).

Police closed the center and left southbound lanes after the crash at around 3:45 p.m. near Mile Marker 7, just north of the Glebe Road exit. Cars could still get by slowly in the two right-hand lanes.

Backups were already reaching as far north as the Pentagon just after 4 p.m. Drivers in the area should expect delays.