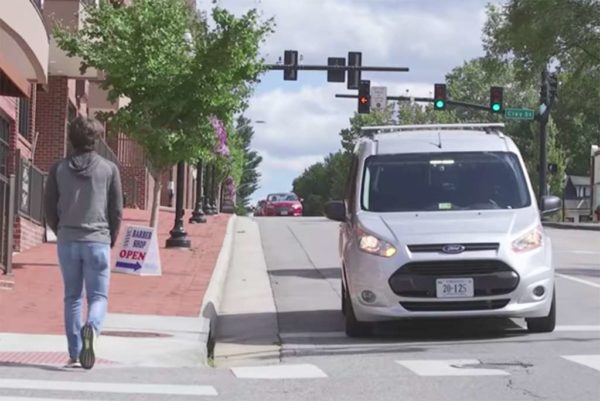 Arlington County should begin planning soon for the long-term growth in the use of driverless cars on its streets, says a local transportation expert.

The county has been on the forefront of research into autonomous vehicles. In August, a car that appeared to be driverless was spotted on the streets of Courthouse and Clarendon.

The following month, car company Ford revealed it was behind the vehicle’s presence, as it was partnering with the Virginia Tech Transportation Institute to test signalling technology and people’s reactions. (A human driver disguised as a seat was actually behind the wheel).

CNBC reports that Ford plans to bring autonomous vehicles to a test market next year, while the CEO of chip manufacturer Nvidia said fully autonomous cars will be on the roads in “no more than four years.”

And with the technology continuing to be refined, the time is now to start planning for a future with more and more autonomous cars on the streets of Arlington, according to Diana Mendes of HNTB Corporation, an architecture and civil engineering consultancy firm with an office in Shirlington.

“Arlington is a very special place,” Mendes said. “There’s a lot of thought given to land use and community and how communities are designed. It’s not too soon to start thinking about those changes so that you have the benefit of being able to reflect and then be proactive as opposed to trying to play catch-up when things start happening that you may or may not think fit with the character of the place you want to be.”

To do it, Mendes said elected officials, staff and other stakeholders must look to the future and explore how government policy and physical infrastructure can be put together. That could include making sure that the likes of crosswalks and stop lights interact with the autonomous cars to enhance everyone’s safety, or exploring how street layouts can change to adapt to the new technology.

But while there are planning decisions to be made, Mendes said, it will be exciting to see how the technology of autonomous cars evolves. Potentially, she said, driverless vehicles will become less like the cars we are familiar with today and may be designed to be more suited for people to get work done on the road.

“These could be portable spaces dedicated to different functions that enable people to recoup time that they would have otherwise lost in more traditional forms of travel,” she said. “I think that changes the landscape dramatically.”