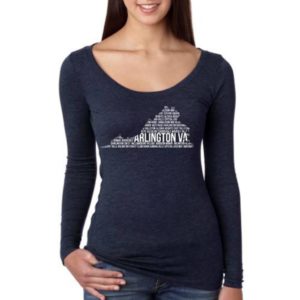 A one-woman clothing company based in Cherrydale is combining social media with traditional store sales for her collection of locally-themed shirts.

Lisa McLaughlin founded District Line Co. Clothing in 2014. Based out of her home office, she makes locally-themed shirts, highlighting the neighborhoods and landmarks.

It started with an Arlington-themed but has since expanded to include the likes of Falls Church, Alexandria and D.C., which is an artist’s sketch of the skyline and monuments.

“It really captures the things that you love about living in one of those cities,” McLaughlin said.

But she said she had issues getting a job after graduating due to uncertainty surrounding federal budgets preventing new hires being brought on, as well as spending a long time on a waiting list to be given a start date. In the meantime, she had the idea to do something else.

“I had this creative itch to do something pretty different from having a keycard to get into my building and not really talking much about the work to being really public and having a really interactive business with the public,” McLaughlin said.

McLaughlin said the company has gained momentum through social media, especially through the hashtag campaign “#ThisIsMyLocal” on Instagram. 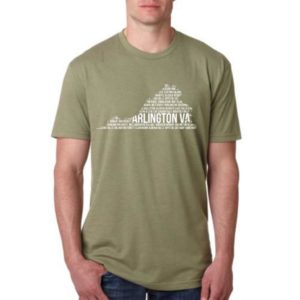 The campaign started with a tag on each shirt encouraging people to post selfies and use the hashtag, showing what McLaughlin described as “the larger D.C. area’s local experience.” In time, McLaughlin said, she hopes to see a lot of photos of her shirts being worn in various local businesses with the hashtag.

McLaughlin said the campaign was especially popular this summer, as people posted selfies wearing the company’s running tank top with the words “Home is Where the Humidity Is.”

And this holiday season, District Line Co. Clothing will look to encourage people to buy matching shirts for their family, and post a photo of them all wearing them with the hashtag “#ThisIsMyLocalFamily.”

“That’ll be our holiday campaign hashtag, and we’re hoping it’ll encourage people to buy a couple of shirts that match and take some fun pictures and tell us about their families and their local experience,” McLaughlin said.

That use of social media combined with sales in traditional brick-and-mortar stores has helped District Line Co. Clothing get customer feedback, and their ideas for designs. McLaughlin said she will look to take on new ideas for a new Arlington shirt for next year, and may also do the same for another running-themed one.

“I see people all the time who are like, ‘I have that shirt! Someone else has that and we had a conversation,'” she said. “That’s what I want this company to be, a recognition of something that you’re wearing saying something about you and creating a real in-person connection.”

McLaughlin said the company has doubled its revenue every year since launch, and is on track to do even better this year. But, she said, given the limited space she has available to work in, further expansion is unlikely, especially as there are still plenty of potential customers in Northern Virginia and D.C. she has not reached yet.

“I think we’ll continue to focus on the area that we’re in. I used to think we’d expand and expand and do Loudoun County and we’d have a Richmond shirt and all that,” McLaughlin said. “But I actually think there’s a lot of people we haven’t reached here, and a lot of really interesting creative work we can do.”

END_OF_DOCUMENT_TOKEN_TO_BE_REPLACED

More Stories
Monique O’Grady: Why You Should Vote For MeArlington Agenda: November 6-12