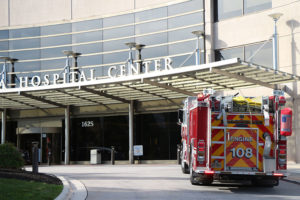 An Arlington woman is facing multiple charges after police say she spit and peed on officers while in the hospital.

The incident started around 3:15 p.m. Monday, when police were called to a business on the 3400 block of Washington Blvd in Virginia Square — the block includes a barbecue restaurant, a grocery store and a convenience store — for a “report of a person drunk in public.”

The woman, identified as 42-year-old Elena Bolonina, was so drunk that medics transported her to the hospital, according to an Arlington County Police Department crime report. That is where the real trouble reportedly started.

“While at Virginia Hospital Center, the suspect allegedly became combative kicking and spitting on officers,” said the crime report. “The subject then urinated on an officer’s foot while being transported to booking.”

Bolonina was arrested and charged with “Assault and Battery on Law Enforcement, Identity Theft, Urinating in Public, Obstruction of Justice and Public Drunkenness.”