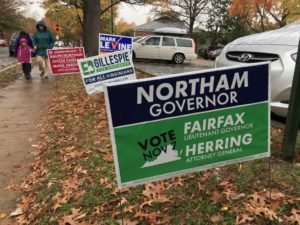 The 55 percent of registered voters who turned out to vote in Tuesday’s election was the highest percentage turnout in an non-presidential year since the early 1990s, according to figures from the county’s elections office.

It was the highest turnout in a gubernatorial election year in Arlington since 1993, when 56 percent of registered voters turned out as Republican George Allen triumphed over Democratic nominee and then-Attorney General Mary Sue Terry.

The county’s highest turnout in a governor election since 1958, the first year of reliable statistics, was in 1981 and 1989 when it hit 60 percent for both years.

(This year’s turnout did set a local record for highest number of votes cast in a gubernatorial election, thanks in part to population growth.)

Northam (D) took 68,315 votes in Arlington out of 1.4 million statewide, ahead of Republican Ed Gillespie with 16,160 in Arlington and 1.1 million across Virginia.

In an email to supporters on Wednesday morning, Arlington County Republican Committee chair Jim Presswood said that while the ticket suffered a “tough loss,” the GOP will be back in Virginia:

Our canvass operation was typically among the top three in the Commonwealth. We knocked over 10,000 doors last Saturday. You represented our party and our conservative values well.

Despite yesterday’s results, I am confident about our prospects over the longer term. The Democrats ran a campaign focused on what they are against. Their governing vision, however, simply won’t solve the problems facing our Commonwealth and country.