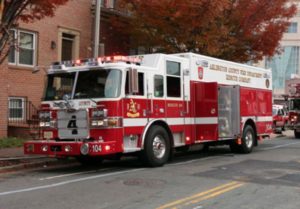 Fresh off a rather delicate ring removal last week, the crew of ACFD’s Rescue 104 used their specialized tools to cut a ring from a woman’s finger yesterday morning.

Firefighters were called to the emergency room of Virginia Hospital Center on New Year’s Day for an elderly woman whose finger was swollen around her ring. Medical personnel were unable to slide it off, so Rescue 104 was called.

Firefighters used a grinding tool and shielding devices to remove the ring and save the woman’s finger without further injury, WTOP reported.

The Arlington County Fire Department tweeted a post-removal finger, which was approved for publication by the patient “for public awareness.”

Tools from Rescue 104 were used to remove a ring from a patients hand this morning. Never attempt to pull a ring off your finger forcefully, as it could cause a Ring Avulsion (Google for more info).