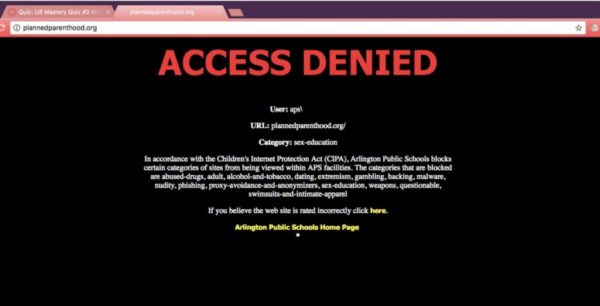 The site for the nonprofit organization that provides reproductive care healthcare is currently blocked on all student computers because it is considered sex education, according to the school system.

After ARLnow contacted the school system about the ban, a school spokesman said the county was considering plans to lift the content filter.

Frank Bellavia, the school system’s communications coordinator, said a decision is expected within the next week. The school system began reconsidering the block after receiving several inquiries, he said.

“Part of the determination is determining if we do unblock across all grade levels,” Bellavia said. “We are still evaluating the site for age appropriateness and for instructional content.”

One parent who contacted ARLnow.com pointed out that Planned Parenthood, which provides abortion services, is blocked while the website of anti-abortion group National Right to Life was not blocked.

The block has been in effect “for quite some time,” according to Bellavia. The school system contracts an external provider that filters content on student computers.

Update at 11:40 a.m. — Bellavia says National Right to Life has now been blocked. “Because it was brought to our attention previously, IT staff blocked that site,” he said.