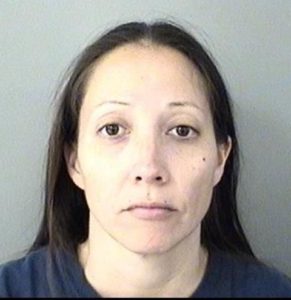 (Updated at 1:35 p.m.) An on-duty Arlington County firefighter was arrested on drug charges at her fire station early Sunday morning.

Police say 36-year-old Stephanie Desai was caught stealing prescription drugs from a fellow firefighter’s personal belongings. She was arrested at Fire Station No. 2 in Bluemont yesterday around 4:30 a.m.

More from an Arlington County Police Department press release, below.

At approximately 4:25 a.m. on February 11, police responded to Arlington County Fire Station #2, located in the 4800 block of Wilson Boulevard, for the report of a narcotics violation. Upon arrival, it was determined that prescribed medication had been removed from the victim’s personal belongings within the fire station. During the course of the investigation, a suspect description was developed based on evidence located at the scene and witness interviews. Following an interview with police, Stephanie Desai, 36, of Alexandria, VA was arrested and charged with Possession of Schedule II Narcotic, Possession of Schedule IV Narcotic and Petit Larceny. She was released on an unsecured bond.

Representatives with the Arlington County Fire Department continue to cooperate with the ongoing police investigation. Firefighter Desai, a two-year veteran of the agency, has been placed on administrative leave without pay pending the outcome of the criminal investigation and an internal investigation conducted by the Fire Department. “Arlington County Fire Department strives to maintain the highest degree of professionalism and public trust. Firefighter Desai is entitled to due process, however, I want to assure the community that allegations of criminal or other inappropriate behavior by staff are taken seriously and comprehensively investigated both internally and by the police department,” said Fire Chief James Bonzano.