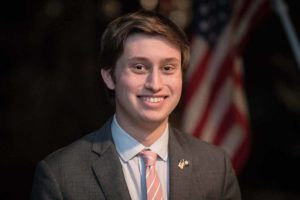 Progressive Voice is a weekly opinion column. The views and opinions expressed in the column are those of the individual authors and do not necessarily reflect the views of their organizations of ARLnow.com

They spoke articulately about their experiences with school psychologists that Arlington Public Schools provides to assist them: one referred to her school psychologist’s office as a “place of refuge”; another spoke of how important the counselor was to her friend who she later lost to suicide; the third emphasized the impact the psychologist had on de-stigmatizing mental health concerns.

Last year, APS Superintendent Patrick Murphy proposed postponing the addition of more school psychologists and social workers (despite a three-year plan to increase the number of these specialists) because of budget concerns, prompting these students to speak out. Due in part to the efforts of these young women, the superintendent found the savings elsewhere.

This year, the addition of more school psychologists and social workers is on the chopping block again. This would be an incredibly huge mistake.

For each of these students, there are many more with similar experiences. According to the Arlington Partnership for Children, Youth, and Families 2017 Youth Risk Behavior Survey, 70% of high school students described being stressed “often or very often.”

Stress can compound over the years and often leads to long-term anxiety. School psychologists and social workers have the ability to counter this, to help us cope with our issues. By providing a safe and accessible place for students to voice their concerns, school psychologists and social workers have the power not only to counter bullying and excessive stress, but also to recommend ways for healing and growing.

If a student is in a crisis, a school psychologist or social worker is an essential “first responder” who can help save the day be coordinating profession psychological care outside of the school or providing care themselves.

The National Association of School Psychologists recommends a ratio of one psychologist for every 500 to 700 students. The planned expansion for FY 2019 would have moved the ratio of psychologists and social workers to students from 1:1,650 to 1:775. While this translates into a significant improvement in the availability of services for students, the superintendent’s requested delay would unfortunately leave many students underserved and at risk for at least another year.

Ultimately, it is the School Board’s budget and the School Board’s decision. In tough budget times, school psychologists and social workers might be considered a luxury. In reality, they are a crucial part of a frontline team of teachers, administrators, and parents that can help students when help is needed.

Funding for school psychologists and social workers also should be driven by the values in the Whole Child Initiative – namely, to ensure that every student is “healthy, safe, supported, engaged, and academically challenged.” To do otherwise hurts students.

It hurts the three young women from Wakefield High School who relied on their school psychologists to survive. It hurts the student members of the LGBTQ community struggling to come to terms with their identity. It hurts students who are victims of racism and xenophobia, and it hurts students whose parents cannot afford to have them seen by a psychologist or other mental health professional outside of school.

Yes, understaffing this program would save money in the short-term. But full staffing is a price worth paying for the long-term benefits to the whole child for the school years and beyond.

Graham Weinschenk graduated from Yorktown High School in 2017. He served as Vice Chair of the APS Student Advisory Board for the 2016-17 school year. Graham currently attends the College of William & Mary. He serves on the Democratic National Committee Youth Council and as the Secretary of the Virginia Young Democrats.

END_OF_DOCUMENT_TOKEN_TO_BE_REPLACED

More Stories
Peter’s Take: Instruction at APS — A Teacher or Technology?The Right Note: What is Your County Up To?