Opened in December 2017, Precarious Beer Project is the brewery attached to the Amber Ox Public House on Prince George Street in Williamsburg, VA.

Far from tapping into the colonial history of Williamsburg and nearby Yorktown, Amber Ox and Precarious Beer Project look to today and tomorrow for inspiration. From a modern pub that serves up gastropub fare to a brewery that seems to be uninterested in doing anything too boring or expected.

When Williamsburg’s 24 year old tradition of having a First Night celebration came to an end with the disbanding of the planning committee, Amber Ox and The Hound’s Tale spearheaded a new public event. Despite being only a month old, Amber Ox Public House and Precarious Beer Project sponsored a block party named PG-500 (the “500” refers to their block of Prince George Street).

Like First Night, their party would welcome everyone, but it was still a party. There was live music, barbecue and local beer — featuring recent releases from Precarious Beer Project.

Below are two Precarious beers. Dominion Wine & Beer is one of the few places outside Williamsburg to get limited kegs on tap from time to time. 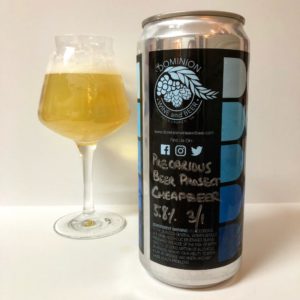 Even their plain old yellow beer has a fun name — CHEAPBEER.

They’re not yelling, they’re speaking in all caps. It may be a yellow cream ale, but it’s well made. There’s a clean white wine and cracker aroma.

The sip starts out with a crisp, winey white grape that finishes a bit sweet and malty. It goes down super smooth. This cream ale would be a great alternative to actually cheap American lagers on a hot summer day. 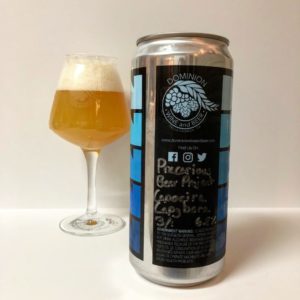 Ooo. A New England IPA. This juicy IPA is a marriage of lower hemisphere ingredients: Patagonian malt and Australian hops. The result is a delicious and hazy beer with the expected smooth mouthfeel.

The sip starts out a little sweet, like juicy fruit gum, then becomes grapefruit bitter. It does sweeten a bit more as it warms, but it never loses that tasty bitterness.

I’m not going to lie, I was disappointed when my crowler was empty.