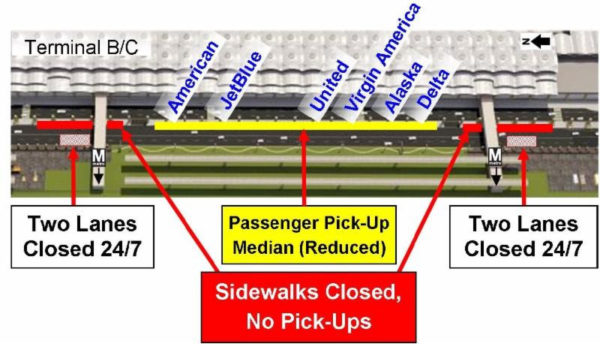 Two left lanes along Reagan National Airport’s terminals B and C arrivals lower-level roadway will be closed through April, effective next Wednesday (March 21).

Lane shifts will block private vehicle passenger pickup lanes along much of the median. Congestion is expected at peak times, though the lane closures and construction will be around the clock. Per a construction site map, passengers arriving with American Airlines, JetBlue, United Airlines, Virgin America, Alaska Airlines, and Delta Air Lines will be affected.

The lane closures will allow for the roadway excavation and heavy equipment foundation drilling that will allow construction crews “to make foundations for new columns” to support new security checkpoints. The billion-dollar airport renovation project, dubbed Project Journey, will also bring a new 14-gate concourse to the airport and an American Airlines members lounge.

To alleviate some of the congestion from the lane closures, terminal garages will be allowing up to an hour of free parking, though a Project Journey lane closure press release advises passengers to take Metro. Police officers will be stationed near the construction area, directing traffic through the work zone.