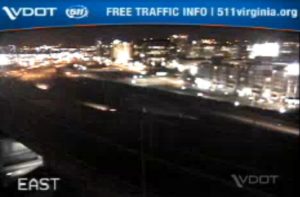 Virginia State Police are investigating a shooting on I-395 near the Pentagon.

Someone fired a bullet through the front seat windows of a car driving on northbound I-395 near the HOV entrance and the Pentagon, according to VSP.

The incident happened just before 8 p.m. No one was injured and there have thus far been no arrests.

In a press release, state police are asking for the public’s help in tracking down the shooter.

At approximately 7:53 p.m., the Virginia State Police Fairfax Division received a call about a shot being fired at a vehicle. When Virginia Troopers arrived on scene, they found a white Toyota Corolla and a gray Hyundai Sonata stopped on the right shoulder of the northbound I-395 HOV lanes at the 9 mile marker. The Hyundai Sonata had a hole in the front seat, driver’s side window and another hole in the front seat, passenger side window. Further investigation confirmed that the holes were the result of a bullet entering the vehicle on the driver’s side and exiting the car through the passenger side window.

The driver in the Hyundai was not injured. No bullet was found inside or outside the vehicle, nor were there any other bullet holes in the Sonata.

The Hyundai Sonata and Toyota Corolla were traveling together at the time of the shooting. Neither driver could provide any description or license plate of a suspect vehicle.

Arlington County Police and Pentagon Police responded to the scene to assist State Police with the investigation, which remains ongoing at this time.