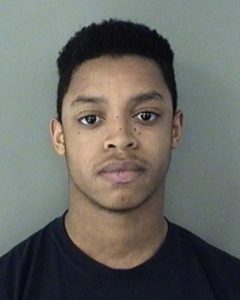 An 18-year-old Marymount University student has been charged with making a bomb threat against the campus.

Police say Samuel Nwalozie, a D.C. resident, posted the threat via social media. The university’s main campus in north Arlington was evacuated the morning of Easter Sunday — which was also April Fools’ Day — while officers and bomb dogs swept the school’s grounds and buildings.

“The investigation determined there was never a physical threat to the safety of the students, staff of campus,” Arlington County Police said in a press release Monday afternoon.

The school was closed for the holiday weekend at the time.

Nwalozie is being held without bond at the county jail in Courthouse.

The Arlington County Police Department has arrested a suspect for his involvement in a bomb threat at Marymount University. Samuel Nwalozie, 18 of Washington, D.C. was arrested and charged with Communicated Threats to Bomb a Structure. He is being held in the Arlington County Detention Facility without bond.

At approximately 8:49 a.m. on April 1, police were dispatched to the 2800 block of N. Glebe Road for the report of a bomb threat posted on social media. Arriving officers immediately began an intensive investigation and a possible suspect description was developed based upon information contained in the social media post and information provided by a witness. Police attempted to locate the suspect on campus and contact him unsuccessfully. The campus of Marymount University was subsequently evacuated while officers continued to investigate. Shortly after 12:00 p.m. the suspect was taken into custody by police just outside of campus. Out of an abundance of caution, EOD K9s continued to sweep campus prior to its re-opening. The investigation determined there was never a physical threat to the safety of the students, staff of campus.

This remains an active criminal investigation and anyone with information regarding this incident is asked to contact Detective J. Bamford at 703-228-4197 or [email protected] To report information anonymously, contact the Arlington County Crime Solvers at 866.411.TIPS (8477).