On any trip to New York City, I try to get to my favorite watering holes and to find new ones.

Recently, I visited the Big Apple with my family. While there, I decided that I’d like to share my favorite restaurants and bottle shops for grabbing a beer. 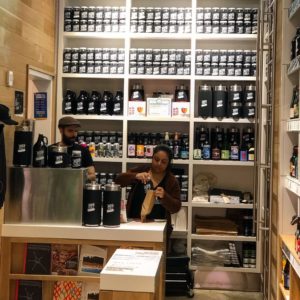 This small space had quite the singles selection with five beers on tap for filling in a variety of vessels that range from pint jars to mini kegs called “Gregs” — a contraction of growler and keg.

I couldn’t pass up a jar of Runcible, a Brett IPA from DC’s Right Proper Brewing Company. My literally pint-sized jar came cozily wrapped in a complimentary koozie and sealed well enough that the longish walk back to my hotel without immediate refrigeration did little to diminish the freshness.

As small as the Lower Manhattan location is, the one at Grand Central is even tinier. But show up on a Friday evening and you’ll find a line that stretches out their door and down the corridor. Thirsty commuters looking for some tasty beer for their train rides out of the city keep this location hopping!

They have big plans for the future, too. Their origins were in the restaurant business with a now-closed Beer Table restaurant in Greenpoint, Brooklyn. Now, they’re returning to their roots with Beer Table Coffee Table on Third Avenue between 45th and 46th Streets.

When in the Financial District, be sure to grab a bite — and maybe some groceries — at Eataly.

Conveniently located upstairs from the Beer Table in Westfield World Trade Center, you’ll find a lot of Dogfish Head beers (they have collaborated on beers in recent years) and beer from an Italian craft brewery, Baladin. While I didn’t manage to try Baladin’s beer, they do make delicious sodas that we all fell for. 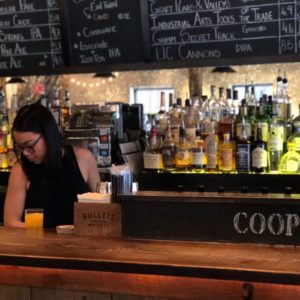 The last time I was in New York City we got up early to get a head start on the day. And we walked. We always walk in New York, but we really managed to get an unusual amount of walking in before lunch. We had walked about as far as we could manage and, while we contemplated our next move, one of us noticed Cooper’s across the street.

It was an oasis. I mean it. It was below freezing outside and, because it was the weekend, they were serving brunch. We were won over (everything was good but do try the french toast).

Now a must-visit for my entire family, Cooper’s Craft & Kitchen in the East Village sits blocks from Cooper Union at 87 2nd Avenue. Inside this corner restaurant with its panoramic views — great for people watching — is a gastropub that has more than 20 taps serving up great craft beer alongside delicious food. If you’re a locavore when it comes to craft beer, you will always find great New York area beers in addition to beers from around the world.

It feels like a cozy neighborhood hang out as much as a trendy craft beer bar. It has plenty of cool, but you’ll enjoy it if even if that’s not your thing. ⠀⠀⠀⠀⠀⠀⠀⠀

Perhaps you’ve just finished your meal at Cooper’s and want to grab a growler or some bottles or cans. Head a few blocks to the east to Good Beer NYC. Located near Tompkins Square at 422 E 9th Street, Good Beer is a step down off the sidewalk and into a compact bottle store that always has a great selection. 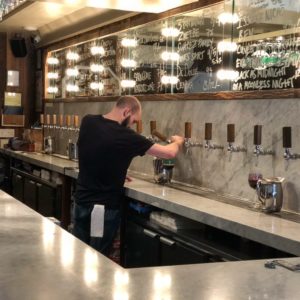 When in NYC, you have to make the trek to Brooklyn’s Tørst in Greenpoint. At least that’s what Dominion Wine & Beer’s Arash Takafor said. There are so many reasons to venture into Brooklyn, but when you’re in Manhattan, it can feel like you’re completely leaving the city. I can tell you that there is no place I’ve been to that was more worth the effort.

Take a few trains from Manhattan — we took three, some with only one or two stops before the change — and get out at the Nassau Ave. station. Just down the block is an unassuming door with a sandwich board in front that marks it as Tørst.

Inside is a warm wood interior with communal tables and a long bar sporting 21 taps. Details are important to the Tørst experience. Each of the tap handles is a different shade of wood, from light to very dark. This corresponds to the color and strength of the beers on draft. Lighter pilsners and session beers are on the light end (think birch) and IPAs and sours run through the middle and heavies and stouts are on the dark end. (think walnut).

Their glasses take this attention to detail to another level. Made up of a pattern of triangles that appears merely ornamental (vaguely resembling pine trees), they are actually a creatively graduated system. Each row represents 5 oz., 8 oz. and 14 oz. One of the standouts from my flight was the 5 oz. pour of Aslin Beer Co. and Stillwater Artisanal’s collaboration Recess, which was refreshingly tart and fruity.

Finally, the food — think gastro beer bar — and the service — our bartender was knowledgeable, warm and friendly — are details that put Tørst on any must-visit list. Three of us had sandwiches (the favorite being a fried chicken breast with celery root remoulade), while my wife had a green goddess salad with pickled grapes and blue cheese crumbles. The sandwiches arrived with no sides but there was so much to enjoy between the pieces of bread that it was anything but underwhelming. Finishing it off, we shared a dessert of house-made vanilla ice cream with cacao nib brittle and amarena cherries.

Our bartender recommended that we walk several blocks to the Northwest to shop at Brouwerij Lane. Also in Greenpoint, Brouwerij Lane is a well-stocked bottle shop that has around 20 taps for growler fills and pours to enjoy on-site by their wood-burning stove inside or out back.

Read more →
More Stories
Not Wasting Waste: How Arlington and Alexandria Turn Trash Into ElectricityOpen Houses in Arlington This Weekend