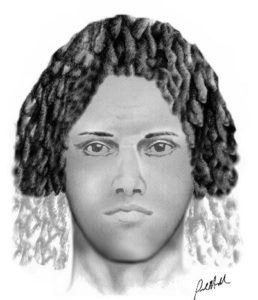 Arlington County Police have released a composite sketch of a man who allegedly tried to abduct a woman in the Ballston area on April 1.

Police say a woman was walking along the 600 block of N. Oxford Street on a Sunday afternoon when a man “grabbed her from behind and attempted to pull her towards his vehicle.” The woman managed to get away and called police.

Police distributed a sketch and a description of the suspect Wednesday afternoon.

“The suspect is described as a black male in his 20’s, approximately 5’9″ to 6’0″ tall with shoulder-length deadlocks with red tips,” ACPD said in a press release. “He was wearing a black shirt, light gray zip up hoodie and dark gray sweatpants at the time of the incident.”

“Anyone with information on the identify of this suspect is asked to contact Detective G. Sloan at 703.228.4198 or at [email protected],” the press release added.