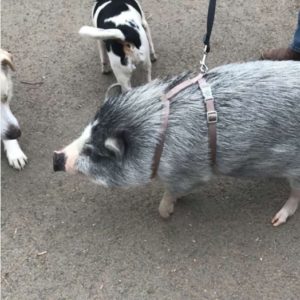 Someone squealed on the owner of a pet pig who has been bringing his or her precious porcine to the Shirlington dog park.

A tipster tells ARLnow that a pig has been coming to the dog park with its owner for at least the past two Saturdays, even though county code specifies that “no animals should be inside the dog park perimeters whether on or off of a tether or leash except for dogs.”

Additionally, Arlington residents cannot keep or maintain “any pig, shoat, sow, hog, or other porcine animal anywhere within the confines of the county.” Pigs have been illegal to keep as pets in the county, according to the local ordinance, since 1935.

The Animal Welfare League of Arlington have heard of the pig, which arrives on a leash and harness with its owner.

“It was casually mentioned to me today that a friend was aware that a pig had been in the dog park,” said Jennifer Toussaint, the county’s chief animal country officer, told ARLnow Monday.

However, the AWLA had not received any complaints or service calls regarding the prohibited pig. Toussaint has never received a formal complaint about a pig in the county during her ten years with organization.

The Dept. of Parks and Recreation would, in fact, have to be first to get involved, given that it is a question of inappropriate park usage, according to Toussaint.

AWLA is an education-based agency, she added, so pigs wouldn’t be confiscated immediately. After informing owners of the county code, the shelter’s policy would be to give owners a week, as a compliance period, to re-home their pet where it could be legally kept.

If an owner was unable to find a suitable home, there are “quite a few farm sanctuaries known to assist locals in Northern Virginia with pets” that were, intentionally or otherwise, illegally acquired.

Unlike some more nuanced local laws, Toussaint said it’s not difficult to understand that it’s illegal to have a pet pig in Arlington.

“Some ordinances are very tricky to understand,” she said. “This is pretty much a clear, one sentence ordinance.”