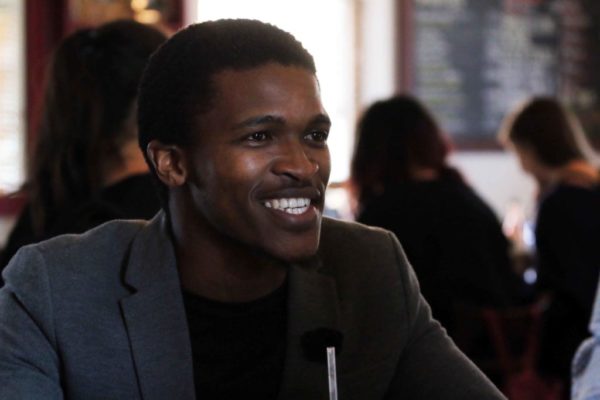 Siyabulela Mandela, grandson of the iconic South African leader Nelson Mandela, never thought he had much reason to come to America.

After all, the 25-year-old scholar is busy working on his doctorate at a South African university named for his famous grandfather. Someday, he even hopes to work as a diplomat for his country and follow in Nelson’s footsteps to resolve conflicts across Africa.

Nevertheless, he felt himself pulled toward the U.S., and Arlington specifically, for one simple reason — he had to get to George Mason University. Mandela arrived in Arlington on April 1, and he plans to spend the next four months working as a visiting scholar at Mason’s conflict resolution program.

“If it was not because of George Mason University, I would’ve never laid my foot in America,” Mandela told ARLnow in a recent interview. “I never wanted to come here. But the school here gave me an opportunity. The work that they do at George Mason overshadows that track record America has in the rest of the world.”

Indeed, Mandela confesses he is quite skeptical of America’s influence abroad, particularly after President Donald Trump’s vulgar, derogatory remarks about African nations sparked an international uproar earlier this year. But as a student of diplomacy, Mandela felt compelled to take a chance on Mason and its School for Conflict Analysis and Resolution.

“I think we are where we are in South Africa because of the contribution of scholars who came from George Mason,” Mandela said.

He’s hard at work on a dissertation on diplomacy and conflict resolution in African nations, like the Democratic Republic of the Congo, and he aims to bring some of the insights he gleans from the Mason scholars whom he admires so much into his work.

Mandela is also planning to do a little sightseeing (he says he’s already toured D.C. a bit and hopes to see the rest of the country in the coming weeks), yet he’d also like to do his best to spread a bit of his grandfather’s wisdom to his American counterparts. He sees plenty of parallels between South Africa’s struggles with racism and America’s history, and he hopes his paternal grandfather’s experience as president working to unite his country after the end of apartheid offers some lessons for American leaders.

“Even though for years and years he was imprisoned by the white folks who perceived themselves as supreme, he could emerge out of that pain and seek nothing but reconciliation,” Mandela said. “That is something that is phenomenal, and angelic. A prisoner who could come out and say, ‘It’s time to make peace.'”

Mandela was born in Qunu, a village in the same province from which his grandfather hailed, yet he reports only spending limited time with Nelson before his death in 2013. As his grandfather began to step away from politics in the early 2000s, Siyabulela says he got the chance to see him more often at family gatherings.

In particular, he remembers his grandfather’s tradition of holding a massive party at his home each Christmas Day, open to any child living nearby.

“He’d stay from morning until evening and shake the hand of each and every child and hand them gifts,” Mandela said.

Mandela says his family is so large that he’s not quite sure how many people can count themselves as Nelson Mandela’s grandchildren — according to his official biography, Mandela was married three times and had a total of six children — yet Siyabulela always felt the pressure to live up to the family name.

“You can’t do things other people can do,” Mandela said. “I cannot be found drunk in the street or fighting in the street like everyone else. I have to conduct myself on the basis of having him as my role model. It’s never an easy road, but interestingly enough it has shaped me as a person and made me to be a better person.”

Indeed, whether it’s his work at Mason or his studies in South Africa, the younger Mandela hopes to live up to his grandfather’s legacy, in ways big and small.