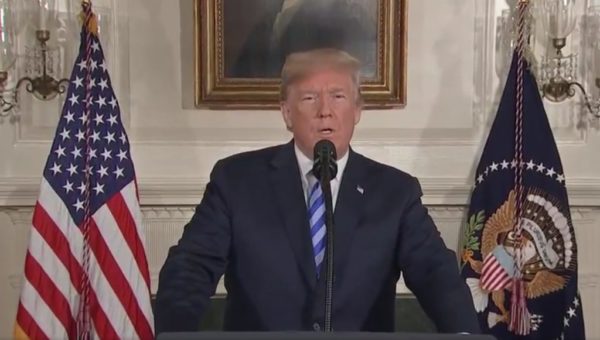 President Donald Trump’s decision to pull the United States out of an international nuclear deal with Iran is prompting condemnation from Arlington’s congressional delegation.

Trump announced Tuesday afternoon that he plans to reimpose economic sanctions on Iran, reversing an agreement hammered out by President Barack Obama’s administration and a variety of other countries to slow Iran’s progress toward building a nuclear weapon. Both of Virginia’s senators, in addition to Rep. Don Beyer (D-Va.), were quick to criticize Trump’s move as one that will undermine the nation’s security.

U.S. Sen. Tim Kaine (D-Va.), who is up for re-election this year, was a particularly vocal backer of the Iran deal. He issued a statement today blasting Trump’s move.

President Trump showed us again today that when he says “America First,” he actually means “America alone.” By violating the Iran deal, the President is creating a new global nuclear crisis while we’re trying to address another one with North Korea. His decision to break from the deal makes our country less safe by damaging our diplomatic credibility, weakening our alliances, and reopening the door for Iran to start enriching uranium. The Iran deal states that “under no circumstances will Iran ever seek, develop or acquire any nuclear weapons.” Why would the President blow up this deal and free Iran of that obligation? President Trump has set us on a dangerous road where war becomes more likely, especially as his advisers beat the drums for regime change, which should never be a goal of U.S policy.

The President’s refusal to waive certain sanctions on Iran sets in motion the dismantling of the Joint Comprehensive Plan of Action, which has successfully prevented Iran from developing nuclear weapons. While the JCPOA was far from perfect, by signing the agreement, Iran gave up 98 percent of its uranium stockpile, dismantled 2/3 of its centrifuges, rendered its heavy water nuclear reactor unusable, and agreed to unprecedented inspections that provide critical insight into, and early warning about, any attempts by Iran to accelerate its nuclear program. Trump Administration leaders, all parties to the agreement, and the International Atomic Energy Agency, which is charged with its verification, have agreed that Iran has complied with its terms.

Simply withdrawing the United States from the JCPOA will not benefit the American people and U.S. national security: it will only succeed in driving a wedge between us and our allies, whose help we need to enforce any future sanctions regime against Iran, and will effectively green light Iran’s pursuit of nuclear weapons. Withdrawing from this agreement makes the United States, and the world, less secure.

Beyer also condemned the move in a statement.

President Trump’s extremely shortsighted decision to exit the JCPOA is another major step backward for our national security. Simply put, the President’s actions have made a nuclear-armed Iran more likely, and therefore made the world a more dangerous place. It will have serious negative consequences for the stability of the region, for our relationships with our allies, and will further embolden hardliners in Iran who want to develop nuclear weapons.

Now it is left to our European allies to attempt to pick up the pieces of the agreement and hold Iran to its commitments, even though we have not honored ours. Functionally, they are being held responsible for this administration’s irresponsibility.

At a time when we are trying denuclearize the Korean Peninsula, ideally with a similarly robust monitoring and verification scheme, this decision severely damages the United States’ credibility as a diplomatic and negotiating partner.

Both the US defense and intelligence communities, including Secretary Mattis, General Dunford, and the IAEA, have consistently certified Iranian compliance with the agreement and the robust nature of the verification regime. The President has embarked upon a path where the risks of both Iranian nuclearization and war with Iran are significantly increased. Unfortunately, it is hard to believe that President Trump has taken this path with a thoughtful plan in mind to address both the significant ongoing issues posed by the Iran as well as the renewed threat of nuclearization.

Once again and to our detriment, the President has shown that he will place domestic political considerations and his disdain for his predecessor above our national interest and global reputation.