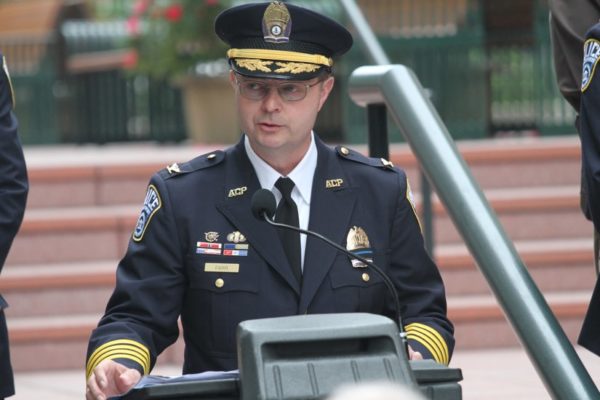 The department announced Tuesday that it plans to start re-allocating its resources on Sunday (May 13) in order to compensate for the county’s struggles in hiring enough officers.

Police Chief M. Jay Farr first revealed some of these restructuring plans in an internal memo this February, noting that the department was 50 officers short of the 370 it’s authorized to employ to maintain current service levels. In a video released by the department Tuesday to detail the coming changes, Farr stressed that county police are “not moving away from the core, fundamental agreements we have with the community” and won’t be making any cuts to services like 911 response or investigations of serious crimes.

Farr did say, however, that the department will likely need to divert some of its officers away from traffic enforcement efforts — including the investigation of traffic-related complaints from residents — and investigations of smaller crimes, such as larcenies, minor hit and runs and other misdemeanors.

“We are not abandoning how we police,” Farr said. “We’re trimming it for a while, and we intend to do this on a temporary basis.”

Farr stressed that each incident’s “solvability factor” will impact just how quickly the department pursues investigations of more minor offenses, with violent crimes taking priority. He added that his officers might not be able to devote quite as much time to avoiding arrests related to public drunkenness in neighborhoods like Clarendon, where police have generally favored preventing major disruptions over simply arresting every person they can.

“We want to maintain that contact with the community and we don’t want the arrests to be the solution, but that requires people,” Farr said. “It actually requires more effort in prevention work and coordinated efforts with our partners.”

Additionally, Farr plans to consolidate the department’s outreach efforts into a single “community resources section.” The department previously divided Arlington into three “districts,” with officers assigned to each one to address community concerns.

That means county officers will no longer attend regular meetings with each civic association throughout Arlington; rather, Farr says the department will organize quarterly meetings for communities in the northern and southern halves of the county, respectively. Farr is also calling off the department’s annual block party, and he plans to reduce the frequency of other outreach events like “Coffee with a Cop.”

Farr stressed that the department is “very aggressively” pursuing new recruits to ensure that these changes don’t become permanent — notably, the County Board recently agreed to increase police salaries in its new budget, following persistent complaints by the police union that pay rates in the county helped precipitate the current staffing squeeze.

But Farr also noted that the new hires will take time to train and get out on the streets, so he’s asking for patience as these changes take effect.