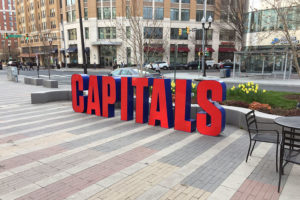 Hockey fans will have a chance to catch the Washington Capitals’ first appearance in the Eastern Conference Finals in two decades outside in Rosslyn.

The Rosslyn Business Improvement District and Arlington County are teaming up to host an outdoor watch party for the Caps’ first game against the Tampa Bay Lightning.

Starting at 7 p.m. on Friday, fans can gather at Gateway Park (1300 Lee Highway) for the 8 p.m. game. The event will also feature appearances from the “Red Rockers” dance team and the team’s mascot, Slapshot.

The game will be aired on a 40-foot projection screen.