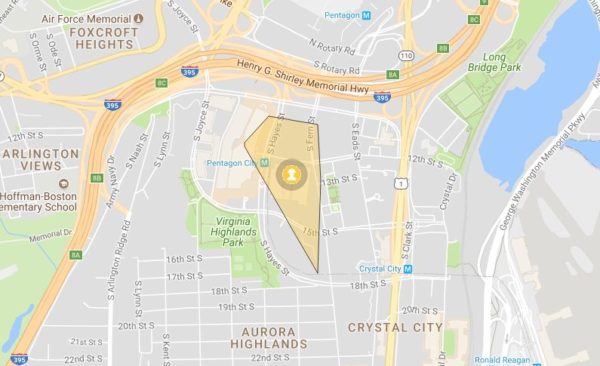 Update at 4:20 p.m. — Power has been restored to the mall and most other places in Pentagon City.

Earlier: A large power outage has left much of Pentagon City in the dark this afternoon.

Large crowds are reported to be leaving the Fashion Centre at Pentagon City after the mall lost power. At least two people were reported to be stuck, and later freed by firefighters, on elevators overlooking the food court.

Traffic signals are dark along Army Navy Drive, including at the especially busy intersection of Army Navy Drive and S. Hayes Street, according to scanner traffic. Several Arlington County Police units are being dispatched to the area for traffic control.

Nearly 450 Dominion customers in the area are without power, according to the power company’s outage map. The cause of the outage is listed as “pending investigation,” though there was a report of a blown transformer in the area.

The estimated time of power restoration is listed as between 4-7 p.m.

ALERT ⚠️: A power outage has been reported in the Pentagon City area. Remember to treat all uncontrolled intersections as a FOUR WAY STOP. pic.twitter.com/XJJgikGmjl

@ARLnowDOTcom why is the power out in pentagon city?!!!