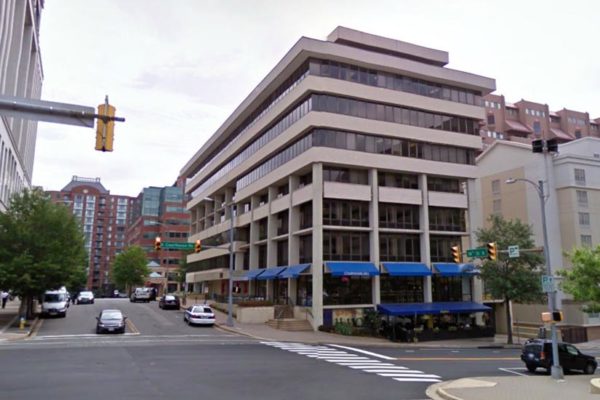 (Updated May 16, 9 a.m.) An Arlington County office building in Courthouse that’s home to the county’s 24-hour homeless shelter is cleaning up from some heavy flooding Tuesday (May 15).

A water pipe on the top floor of the seven-story building at 2020 14th Street N. broke Monday night (May 14), according to Jessica Baxter, a spokeswoman for the county’s Department of Environmental Services.

Baxter told ARLnow that “drainage from the broken pipe impacted all areas of the building,” including the county’s Homeless Services Center, other government offices and even the Chelsea Market & Deli and Ragtime Restaurant on the building’s ground floor.

“County contractors are on-site cleaning up the water, repairing the pipe and recharging the chilled water system to restore HVAC services on floors 4-7,” Baxter wrote in an email. “HVAC services for the lower floors were not impacted.”

Baxter says the flooding has not impacted services at the shelter, but it has forced county employees working on the first and fifth floors to temporarily relocate to the other offices.

The county bought the building for $27 million in 2012, in part to open a new, year-round shelter for the homeless. The shelter opened in 2015.