The Arlington-natives, David and Richard, have worked in and around beer for years between The Better Beer Authority beer review video series on YouTube and a craft beer meet up group called Beer Head on meetup.com. Now, they get to make the beers that they want to drink. 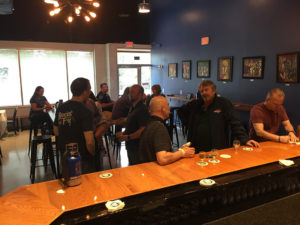 They’ve built a tap room for today’s beer drinkers with charging stations for phones and other devices, coat hooks galore and plenty of gathering space for hanging and trying their line up of beers. They’re hoping they can find their niche in the beer-rich LoCo.

I reached out to co-owner Richard Hartogs with some questions to figure out just what a “rocket frog” is and where they’re planning to go with the brewery.

What Is a “Rocket Frog”?

“September 6, 2013, a frog was propelled in the air by the Minotaur V rocket on Wallops Island, VA as the boosters blasted the rocket to space. The frog basically photo bombed a NASA photograph and it gained media attention. I thought Rocket Frog was a funny name and suggested it to David. He said yes.  It turns out the rocket was made by Orbital ATK, a mile from the brewery.”

Do you plan to focus on particular styles?

“We want to grow into 4-5 flagships, like Angry Alice IPA, Minotaur V American golden/blond ale, and a kettle sour. We also want to focus on seasonal, rotating IPAs, experimental beers, barrel aged beers, whatever comes to mind. We want you to both know what to expect in our tasting room, and have fun trying whatever Russell Carpenter comes up with.”

What kind of packaging will you offer and do you plan to distribute?

“We will hopefully have our kegs out to market in Northern Virginia and DC within a few weeks, once we sign with a distributor. Kegs will be 1/2 barrel and 1/6 barrel. We hope to bring in mobile canning by the end of month 3. We’ll can some specialty, small batch beers that will be sold out of our tasting room and send our bigger batch beers to market.”

“I wouldn’t say there is one person who is inspiring us. I would say we are driven to be successful by the five-year journey/struggle to get open. After such a long process, we’re driven to make sure our beer stands up to anything in our market and our tasting room is a great place to drink. And we’re driven by the risk we’ve taken in order to open the brewery, in particular David and his wife Jennifer Showell-Hartogs.”

Do you have any interesting offerings coming up?

“Cosmic Trails IPA, which is predominantly Citra and Galaxy hops, should be ready and tapped by the end of May.  It’s already tasting great in the fermenter, and it’s still going to get dry hopped some more before it gets kegged off. We are doing our first kettle sour this week, which I’m really excited to see how it will turn out.”

Well, they’ve already had a serendipitous visit from a frog during an industry event to celebrate their opening. Perhaps it was a sign. I was able to get three of their first beers to try — it’s a great start. 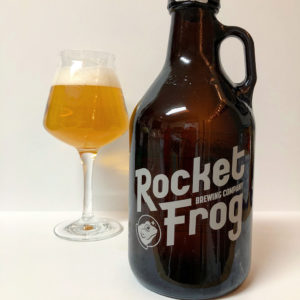 The very first beer to make it through Rocket Frog’s system, Minotaur V is named after the rocket that made a frog famous. As it turns out, the Minotaur V was built by nearby company — Orbital ATK. It’s like it was fate. I’m going to come right out and admit that I’m not a fan of blond ales, generally. They tend to be malty and plain. This one is different.

Pouring golden and clear with a generous creamy head, the aroma enticed with cracker, carnation and a bit of cardamom. The sip was smooth and lightly winey with just enough hops to mask any maltiness. I might not tend to reach for a blond ale, but ignoring Minotaur V would have been a mistake. Nearly as clean and crisp as a lager, and as sessionable, it will make a great go-to during the hot Summer months. 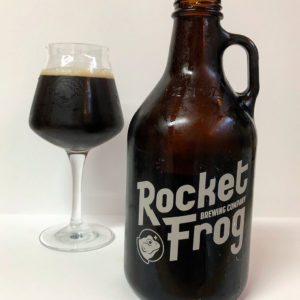 Rocket Frog is already playing with their formulas, and they’re barely open. According to their Untappd profile they have already brewed this brown ale with and without coffee and served it with smooth nitro. Of course, I got the coffee version — brewed with Nicaraguan coffee. Unlike the usually malty blond ale, I love a brown ale. I’m always curious to see what a brewery does with this old fashioned style — and by old fashioned I mean 90s microbrewery old.

I don’t know that I’d say that a good brown ale makes the brewery, but I haven’t been disappointed yet. This one is no exception. I wouldn’t fault someone ordering a second one of these and calling for a grande — the aroma is iced coffee and caramelized sugar. Coffee continues in the sip, where it balances the light bitterness from the roasted malt. So dark and toasty is the flavor that you could probably call this a porter, but I’m not complaining. This one goes down so smooth, you could pour some in one of those ubiquitous clear plastic cups and drink it with a green straw. 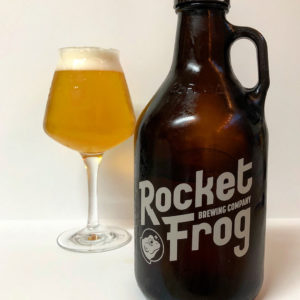 This big beer was just right. It might refer to Alice, but it reminds me of Goldilocks. Angry, Angry Alice is the double IPA to Rocket Frog’s future flagship IPA, Angry Alice. Just get a load of the hops that Rocket Frog used to brew and dry-hop this DIPA: Citra, Mosaic, and Simcoe pellets with LupulN2 powder.

Though not hazy, Angry, Angry Alice had all the signs of a juice bomb. Passion fruit, clementines and pine sap made for an intoxicating aroma. The sip was sweet and fruity — mango followed by grapefruit as the sweetness is delightfully tempered by bitterness. This big DIPA might be simple, but the flavors are huge and on point. I look forward to seeing what other special IPAs they have to offer. That Cosmic Trails sounds pretty good!

Join Dominion Wine & Beer on Friday, May 18 from 5-7PM as they host their weekly beer tasting. They’ll be featuring a collaboration between two great local breweries, Solace Brewing Company and Eavesdrop Brewery — JUICE HEAD. It’s is a 9% ABV DIPA that they just tapped on the growler station.