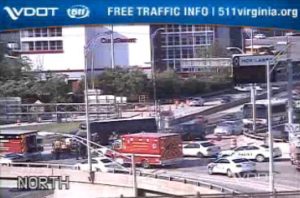 Police and firefighters are on scene of a motorcycle crash on Shirlington Circle over I-395.

A motorcycling “wiped out” while driving around the circle, according to scanner traffic, and suffered a number of injuries. The injuries are believed to include broken bones but are not life-threatening.

One lane of Shirlington Circle traffic is squeezing by the crash scene; it is unclear if any ramps are blocked.

The crash comes as thousands of bikers descend on the area for the annual Memorial Day weekend Rolling Thunder rally.