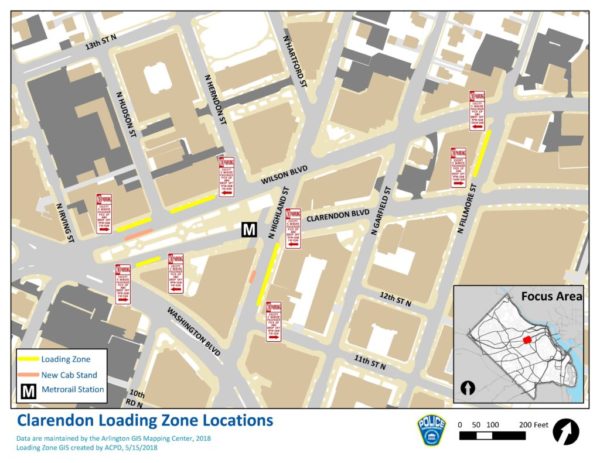 New nighttime drop-off and pick-up zones are coming to Clarendon in an effort to stop double parking, blocking of crosswalks and other bad driver behavior. 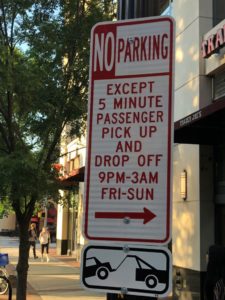 The zones, created in response to drivers clogging roads and creating dangerous situations for pedestrians during peak bar-going times, are being placed throughout the neighborhood.

The county is specifically working with Lyft, Uber and Red Top Cab to make sure the new traffic patterns are followed by those driving nightlife patrons to and from Clarendon.

The initiative also aims to curb illegal practices, such as double parking and stopping in travel lanes, bus stops, bike lanes and crosswalks, to load and unload passengers.

The designated drop-off and pick-up zones in Clarendon will be enforced between Thursdayand Sunday nights from the hours of 9 p.m. and 3 a.m. Zone areas are:

Motorists should be on the lookout for ‘No Parking Except 5 Minute Passenger Pick Up and Drop Off’ signs. The Arlington County Police Department will strictly enforce the new regulations, however; a three week warning period is planned to help bring public awareness to the changes and encourage compliance through the issuance of verbal and written warnings for observed infractions.  The warning period will also give drivers and riders an opportunity to become familiar with the newly designated pick-up and drop-off zones.

Violators will be issued citations at the completion of the warning period.

“With the popularity of Clarendon, safety of all people in the public right-of-way is a top concern for us” says Dennis Leach, director of transportation. “We believe the zones will benefit everyone – customers, businesses and neighborhood residents – by providing a safer flow of traffic and reduced conflicts between motorists and pedestrians in one of the County’s busiest neighborhoods.”

“The Arlington County Police Department is committed to maintaining Clarendon as a safe destination for nightlife and entertainment” says M. Jay Farr, Chief of Police. “The officers assigned to Clarendon on Friday and Saturday evenings continue to monitor the area to reduce alcohol related harm and address public safety concerns. The new zones are one additional layer to ensuring the overall safety of customers, businesses and neighborhood residents.”