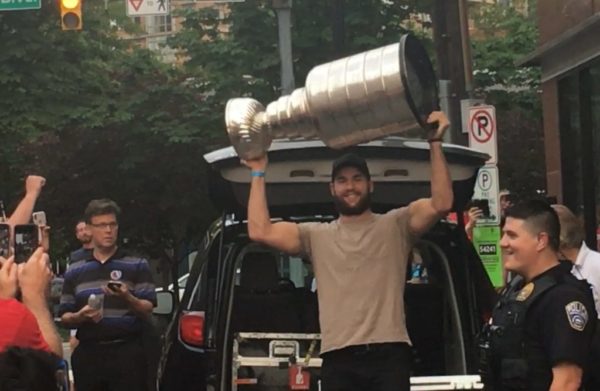 (Updated at 12:10 a.m.) Dozens — if not hundreds — of adoring fans flocked to Clarendon tonight (June 8) to welcome home the Washington Capitals as they brought home the Stanley Cup.

The team gathered for a private celebration at Don Tito along Wilson Blvd, and fans congregated on both sides of N. Hudson Street to cheer and offer their thanks. Players arriving at the restaurant early on included T.J. Oshie, Tom Wilson and Philipp Grubauer. 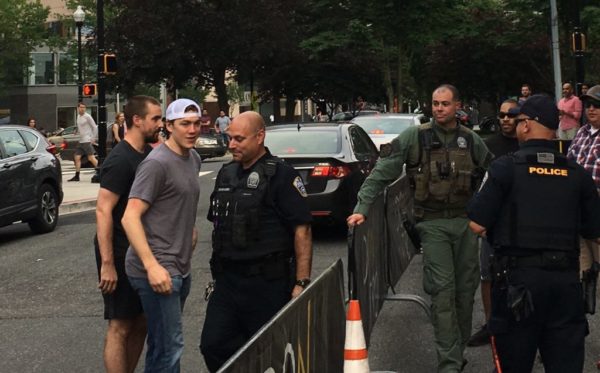 Wilson even got the chance to hoist the Cup and show it off to the assembled crowd.

The Stanley Cup is here in #ArlingtonVA. Tom Wilson too. #ALLCAPS pic.twitter.com/zRUBCoIIqQ

The Caps returned from Las Vegas earlier this afternoon, after besting the Golden Knights in five games to win D.C. its first major sports title since 1992.

ARLnow broadcast the staggered arrivals of players and the Stanley Cup on Facebook Live. The Cup can be seen in the beginning of the video.

Caps star, Conn Smythe Trophy winner and one-time Arlington resident Alexander Ovechkin arrived after our live feed ended. Later Ovi brought the Cup down from the party to show screaming, smartphone-wielding bar-goers, as seen in the video below.

Despite a brief summer thunderstorm rolling through — and Thursday’s excitement putting a slight damper on Clarendon’s Friday nightlife — the line to get into Don Tito’s remained relatively long as of 11 p.m.

More social media posts from the celebration, after the jump.

Who wants a sip? @dontitova

.@ovi8 shows off the hardware. @dontitova

Hey @dcsportsbog @darrenrovell @bustedcoverage What's a Friday night in Arlington if you can't take Stanley out with you too?? @TJOshie77 and his new buddy play nice with fans outside @dontitova #StanleyCup #partyup #pushmediagroup @ARLnowDOTcom #ALLCAPS pic.twitter.com/MU0sZ8ZfUU