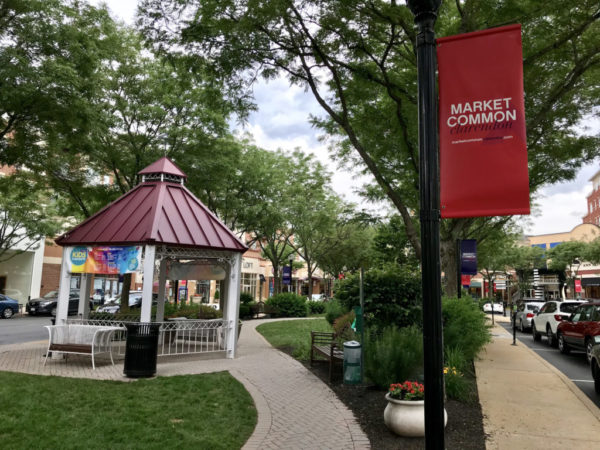 Local nonprofit Project Knitwell will celebrate World Wide Knit in Public Day this Saturday (June 9) with an event in the “The Loop” at Market Common Clarendon.

From 11 a.m. to 2 p.m., community members can join Project Knitwell volunteers to learn how to knit, enter a raffle and experience the wellness benefits of knitting in person.

“We want to spread the word that working with your hands and knitting and making something can have health benefits,” Project Knitwell Executive Director Michelle Maynard told ARLnow. “The science is starting to catch up with what knitters and other crafters already know.”

World Wide Knit in Public Day launched in 2005 with 25 events around the world, according to its website. Last year, “there were at least a thousand, if not more of these events in 54 different countries,” Maynard said.

This event is Project Knitwell’s first in recognition of World Wide Knit in Public Day, and it joins a long list of programs the nonprofit has offered since its founding in 2010. Volunteers have taught knitting to patients and families at the Virginia Hospital Center, in after-school programs for at-risk youth and through summer programs for children and young adults with cancer.

Project Knitwell communicated with businesses located at Market Common and beyond to help put together a raffle basket and several prize bundles, Maynard said. The basket and bundles consist of items for knitters and non-knitters alike, including a $50 gift certificate to the Cheesecake Factory, hand-crafted needle point protectors and a number of yarns.

Raffle tickets will be $10 each or four for $20. The first 24 attendees will also receive a free cupcake from Williams-Sonoma, Maynard said. The event’s Facebook page recommends that attendees take the Metro to avoid road closures due to the Armed Forces Cycling Classic.

For first-time knitters, Maynard said she hopes the event demonstrates that knitting is fun.

“It’s something that is a great way to pass the time, whether you’re on public transportation or in a hospital waiting room,” Maynard said, “It’s a great alternative to [being on] your screen, and [instead] doing something with your hands that involves a rhythmic almost meditative aspect to it.”