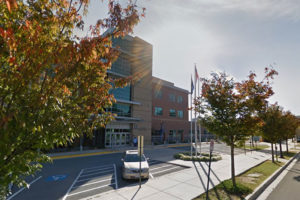 The Arlington School Board has kicked off a process to rename Washington-Lee High School, aiming to settle on a new moniker for the school before the year is out.

The School Board voted unanimously at its meeting last night (June 7) to approve a change to the school system’s approach to naming school buildings. Though the policy will apply to all current and future county schools, it specifically stipulates that the Board should select a new name for Washington-Lee, given Confederate Gen. Robert E. Lee’s legacy fighting for the cause of slavery.

The Board has been considering a name change at the school since last summer, when a violent white supremacist rally in Charlottesville sparked a national conversation about Confederate symbols and prompted calls in the community to change the name. Yet the Board opted to revise its whole policy around school names, rather than just change Washington-Lee’s moniker specifically.

But with the new policy passed, the Board will now move forward with a three-month long process of finding a new name for W-L, which has borne the same name since it opened in 1925. Board members are set to pick a committee to deliberate on the name in September, and could vote on a change by December.

“Celebrating your school pride should not mean having to wear a shirt like this one that honors a person who may not share your values,” said Board member Monique O’Grady, while holding up a W-L t-shirt. “As we become a more diverse community, we must become more open to the perspectives of many, and how holding onto some elements of our past can have an impact on our future.”

The decision will undoubtedly come as bad news for some W-L alums. A number of graduates from the school have publicly objected to the move, both at Board meetings and in community demonstrations. Corey Stewart, chairman of the Prince William Board of County Supervisors and a candidate for the Republican nomination for U.S. Senate, has even spoken out on the issue, in keeping with his defense of other Confederate symbols around the state over the last year or so.

“This implicitly would vilify virtually every southern family from the Civil War, in perpetuity,” said George Dodge, a W-L alum who spoke at the meeting.

But Board members stressed that they also heard frequently from parents interested in seeing the name change, fearing that Arlington Public Schools is sending the wrong message by so prominently honoring a man like Lee.

The lone bit of resistance to the policy change came from Vice Chair Reid Goldstein. While he acknowledged that the naming policy needed to be set in stone as APS prepares to open a bevy of new schools across the county, he saw no reason for rushing forward with a process for renaming W-L specifically that he believed wasn’t as precise as it needed to be.

“There is no required timeline for renaming an existing school, and no rationale for why it must be done by the December of [2018],” Goldstein said.

Goldstein made a motion to create a committee to study potential renaming requests and make recommendations to the Board, but he was the only Board member to support it. Even still, he ultimately agreed to let the renaming process move ahead, noting that Lee “had good run in Arlington Public Schools, 93 years, but other heroes will arise.”

Under this new plan, W-L is set to have its new name displayed on all of the school’s facilities and logos by September 2019.

“Our kids need us to show them the path forward in a respectful, thoughtful kind ways that unifies us,” said Board member Nancy Van Doren. “I think we can do that. I think that’s the legacy of both of the gentlemen on that building right now.”