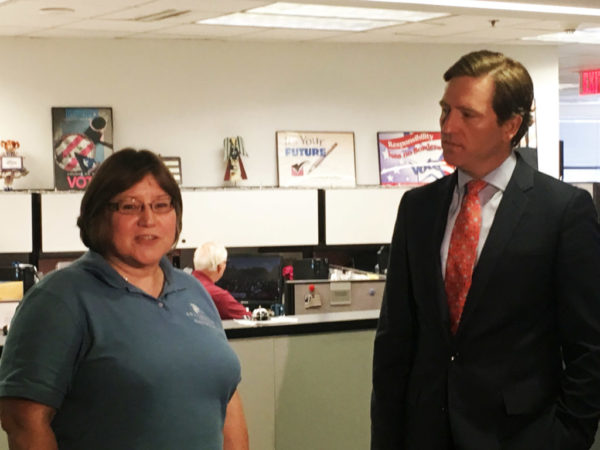 Arlington voters can rest easy that Tuesday’s primary contest will be safe from cyberattacks, as local and federal election officials alike tout the county’s sound methods for counting ballots.

County election administrators welcomed a contingent from the U.S. Department of Homeland Security today (June 12), who swung by to study how Arlington is managing its voting technology as the threat of foreign meddling continues to loom large ahead of the fall’s midterms.

County Registrar Linda Lindberg touted her office’s “practical and low-key approach” during the visit, noting that the county uses paper ballots for all its elections. Though it may seem like an antiquated approach in the age of smartphones, election security experts have increasingly urged localities to abandon electronic voting machines in favor of having a paper record of all ballots cast, should intruders find a way to breach their systems and attempt to alter vote totals.

“Arlington takes a very pragmatic and a keep-it-simple approach,” Chris Krebs, a senior DHS official focusing on cybersecurity, told reporters. “We need to continue that trend toward a voter-verifiable paper trail… That’s the progress that we’re seeing nationwide.”

Krebs says he’s spent the last few months making similar trips and sitting down with state and local officials to make sure they understand the cybersecurity risks associated with voting technology. He added that federal officials are hoping to offer any help they can to localities struggling with securing their systems, though he noted that Arlington doesn’t need much in the way of resources.

Lindberg says her office has all manner of “checks and balances” throughout the process of testing vote-counting machines to insure that nothing was amiss before voters started showing up at the polls. She also noted that she’s set up a robust screening system for “spear phishing” attacks, after would-be hackers targeted elections officials in other states to try and trick them into clicking on fraudulent emails, giving them access to election systems.

“Arlington County actually has very strong, stringent controls in terms of the phishing attacks we’ve seen, mostly through emails,” Lindberg said. “We have good training, good screening of spam emails. In fact, important emails sometimes end up in my spam folder so you have to go back and look at that sort of thing.”

By and large, however, Krebs says DHS hasn’t seen the same sort of attacks on election officials that they did ahead of the 2016 election. But with intelligence leaders continuing to warn that Russian operatives could very well try to interfere with the midterms as a preamble to the presidential race in 2020, Krebs also doesn’t want to see local officials let their guard down.

“Even though we haven’t seen any activity the way we did in 2016 with direct threats to election infrastructure, we don’t need that direct threat,” Krebs said. “We take this issue very seriously.”