Sponsored by Monday Properties and written by ARLnow.com, Startup Monday is a weekly column that profiles Arlington-based startups and their founders, plus other local technology happenings. The Ground Floor, Monday’s office space for young companies in Rosslyn, features a 5,000-square-foot common area that includes a kitchen, lounge area, collaborative meeting spaces, and a stage for formal presentations.

(Updated at 2:05 p.m.) In a post-Moneyball world, data analysis has become an integral part of decision making in the world of sports and beyond.

Ballston-based Decision Lens — whose services have been used by the Oakland Athletics and Green Bay Packers along with federal agencies and pharmaceutical companies — helps organizations move away from “advocacy-based approaches,” where whoever has “the loudest voice or biggest gavel” gets the final say, said John Saaty, CEO and co-founder of Decision Lens.

Instead, Decision Lens staff works with companies to develop criteria that capture their priorities. Its 100 government and commercial clients have access to a software program which uses that criteria to provide scenario and data analysis, among other services.

“When people see a much more effective and vigorous way to drive planning and improve it over time, they don’t go back to conference tables,” Saaty said. 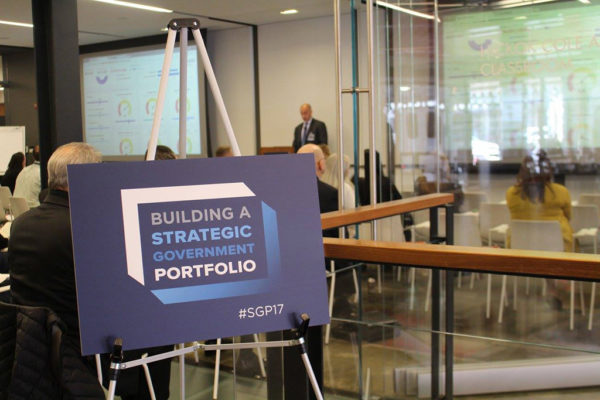 John Saaty and his brother Dan Saaty launched Decision Lens in 2005 with around five employees. John focused on the company’s growth and management, while Dan developed the design of the software.

Although some people find the idea of working with a sibling “just abhorrent, we sort of complement each others skills,” John Saaty said.

In 2014, Decision Lens made headlines for receiving $6.5 million in investment to service the more than 80 “enterprise-level” customers it boasted at the time. Now, Decision Lens has around 60 employees, and retains all of the clients who began using the service in 2005, Saaty said.

Decision Lens’s model is grounded in analytic hierarchy process, an approach to decision-making developed by John Saaty’s father, Thomas Saaty, while he was working at the State Department during the Cold War.

“What he found is we had no way to really make tradeoffs among different priorities that we were trying to accomplish in the negotiations with the Soviets,” John Saaty said. This finding prompted Thomas Saaty to develop “a mathematical theory that actually quantified… tangible and intangible factors in a negotiation.”

Decision Lens has worked to expand over the years with its “growth mindset,” John Saaty said.

“I always tell people there [are] two things you can be certain of: one of them is that change is going to be the norm… and the second thing I tell them is this year will be the worst year we have going forward,” he said.

Accordingly, Decision Lens is not planning to slow down anytime soon — in about six months, they plan to launch a new service to streamline government planning and budgeting, Saaty said.

The company has previously worked with government agencies like the Defense Health Agency and Federal Aviation Administration to allocate around $30 billion and $2 billion in funding, respectively. The cost of a Decision Lens license depends on the size of the client’s budget.

Saaty also lauded the benefits of being located in Arlington, citing resources like Arlington Economic Development, the Ballston Business Improvement District and the young, driven workforce.

As the company aims to grow more, Saaty envisions a world where “Decision Lens” becomes “almost like a verb” — where it is commonplace to ask, “did you Decision Lens this?”

“Our goal going forward is to be the standard in planning and budgeting,” Saaty said.