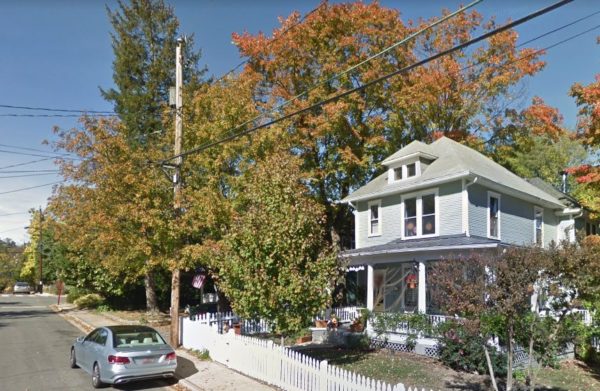 Arlington officials are pledging to take a fresh look at how they manage local historic districts, after one neighborhood’s design standards is forcing a Maywood family to pay tens of thousands of dollars for a roof repair.

Brendan and Jody Devine have spent more than a year working with county officials to get permission to use asphalt shingles when overhauling the roof of their home along the 3500 block of 21st Avenue N. But the county’s Historical Affairs and Landmark Review Board, known as the HALRB, blocked that request because the home is located in the Maywood Neighborhood Historic District, and the board feared replacing its current stamped tin shingle roof with a more modern style of roof would leave it out of step with the rest of the neighborhood.

The Devines appealed that decision to the County Board, but members voted unanimously yesterday (Tuesday) to uphold the HALRB’s decision.

Board members, however, expressed a great deal of remorse over that vote, lamenting that the county code obligated them to side against the Devines, even if they agreed with their concerns about the tin roof’s cost.

“We’re ending up on the wrong side of justice if we don’t provide a way to promote the architectural compatibility with the neighborhood, while at the same time accounting for real life circumstances,” said Board Vice Chair Christian Dorsey. “I think we can figure out a way to do better.”

Brendan Devine noted at the meeting that the tin shingles would likely cost as much as $30,000, compared to $5,000-6,000 for the asphalt option, and that that is only for a portion of the roof. He argued that the county would be effectively making the neighborhood an “enclave” for the wealthy if the Board forced homeowners to embrace such expensive options.

In general, Board members agreed with that sentiment, though they felt there was little they could do to make a difference in this particular case.

County Attorney Steve MacIsaac cautioned that members had little choice but to side with the HALRB’s ruling unless the Devines could prove that board made some sort of “arbitrary and capricious” decision. The Board took heed of his opinion, but with some communities around the county trying to pursue historic districts in order to protect affordable housing options, several members expressed a willingness to revisit the county’s policies on the matter.

“This is a cautionary tale,” Chair Katie Cristol said. “We’ve had members of our community who have sought to use a historic designation overlay as a tool to protect affordability… but to the extent we’re looking to protect either garden apartments or single family homes, it can sometimes work at cross purposes.”

Board members were particularly interested in finding a way to get the HALRB to consider the cost of a change like this as a central part of their deliberations. Joan Lawrence, the HALRB’s chair, told the Board that her group did indeed take the expense of the tin shingles into account, but ultimately felt making an exception in this case could lead to a slippery slope.

“A defining feature of this historic district is this particular roof,” Lawrence said. “We’re dealing with a situation of death by a thousand cuts… I don’t think being good stewards of a historic neighborhood, a historic house, is making it an enclave.”

Board member Erik Gutshall would concede Lawrence’s point that the Devines did “buy into a neighborhood with high standards to be upheld.” Certainly, the homes in the area aren’t cheap either — the Devine’s house was valued at just over $863,000 in 2018, according to county property records, and other nearby homes are similarly expensive.

But the Board broadly signalled that they were far from satisfied with this outcome.

“If we would want to pursue some fresh look at the [historic district] standards, we need to think about, what are the next steps?” Cristol said.

An excerpt from the Devine’s letter to the County Board is below.

The installation of a new tin shingle roof represents a significant financial investment and will cost a homeowner approximately 4 to 5 times as much as would installing an asphalt shingle roof. Illustrative of this are the estimates we obtained for both materials, which had stamped tin shingle replacement ranging from $20,000 to $30,000 and asphalt shingles ranging from $5,000 to $6,000. This this cost is for the replacement of approximately one third of our total roof area. The home across the street from us had its entire roof replaced with new stamped tin shingles (an area approximately 3 times the size of what needs to be replaced on our home) 9-10 years ago at a cost of less than $25,000. Today that same roof would cost upwards of $50,000-$75,000. There is only one real reputable producer of these shingles in the United States, very few roofers who are skilled at installing them, and the cost of materials increases significantly year over year. This amounts to a significant financial burden that the County is leveling on a homeowner for what is a relatively minor architectural change. Requiring that an average homeowner install what amounts to luxury features of exorbitant cost on their home very much runs counter to the spirit of strong individual property owner rights prevalent throughout the State of Virginia. The preponderance of homes within Maywood currently have asphalt shingle roofs and the HALRB maintains that the roofs of new additions in Maywood be clad in asphalt shingles, which demonstrates that they do consider that material compatible with the neighborhood character. […]

The intent of establishing the Maywood Historic District, as stated in the design guidelines, is to maintain the overall character of the neighborhood, not to dictate individual features of specific homes. Replacing a tin shingle roof does not impact the character of the neighborhood and represents a significant financial burden on homeowners. If neighborhood residents wished to require that metal roofs be replaced in kind, then they would have written guidelines that included that requirement, which they did not. We fully support maintaining the historic character of Maywood, but we also strongly feel that allowances must be made when it becomes clear that replacement of materials in kind is no longer a financially reasonable expectation for the County to have of district residents.