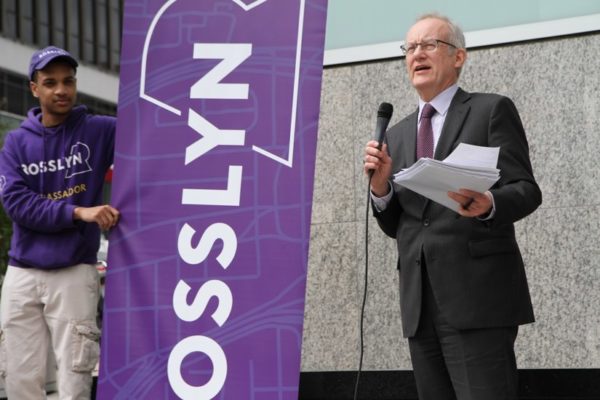 Vihstadt, the first non-Democrat to sit on the Board since 1999, has long defied easy political characterizations. He won office in 2014 with the backing of both the county’s GOP and Green Party, earned the endorsement of several elected Democrats and has donated to Republicans and Democrats alike over the years.

Now, he’s opting to endorse one Democrat even as another, Matt de Ferranti, challenges him for re-election this fall.

By contrast, Corey Stewart sows fear, resentment and division among Virginians everywhere he goes. While I don't always agree with Senator Tim Kaine, he has my vote on November 6. (3/3)

Stewart, the chairman of the Prince William Board of County Supervisors and the former head of President Donald Trump’s Virginia campaign, has frequently managed to stoke controversy throughout his lengthy political career. He earned national attention for pushing policies targeting undocumented immigrants around Prince William, embraced the Confederate flag during his unsuccessful run for governor last year and courted the support of white nationalists, though he has frequently disavowed any charges of racism leveled against him.

Since earning his party’s Senate nomination in June, Stewart has even attracted condemnations from some fellow Republicans. Accordingly, when he was informed of Vihstadt’s decision by ARLnow, Kaine was not overly surprised to hear the news.

“I have an opponent who, he’ll pick as many fights with Republicans as he’ll pick with Democrats,” Kaine said during a campaign stop in Ballston. “There may be a lot of Republicans who feel like he’s pushing them away, and I’m going to be proud to have anyone’s support.”

Stewart, however, says he’s never even heard of Vihstadt, and quickly dismissed his criticisms.

“A lot of the establishment crowd have more in common with Tim Kaine than they do with me,” Stewart said. “They don’t have anything in common with me, because they don’t want much to change in Washington. It’s all very chummy… I’d rather lose all those establishment types and pick up the working class voters. That’s a good trade, to me.”

Yet Jill Caiazzo, the chair of the county’s Democratic Committee, pointed out Vihstadt declined to back Kaine in 2016 when he was on the ticket as Hillary Clinton’s running mate — Vihstadt put out a statement after the election saying that “all four party nominees on the Virginia ballot for president fell short of what our nation deserved — and needed in 2016.” She sees Vihstadt’s decision as “further evidence that voters who previously considered third party candidates are voting Democratic in the Trump era.”

“These voters will send a strong message in 2018 that the extreme Trump-GOP agenda is bad for Virginia and bad for Arlington,” Caiazzo wrote in an email. “We expect that a majority of Arlington voters will vote for Democrats up and down the ballot this November, including Democrat Matt de Ferranti for County Board.”

Political scientists have indeed speculated in recent weeks that Stewart could hurt the party’s other nominees down the ballot, should Republican voters stay home. Several Republican members of Congress have already declined to campaign with Stewart, and while Vihstadt might not be wholly dependent on GOP voters, he too could fall victim to a wave election for Democrats made all the larger by Stewart’s shortcomings.

Stewart doesn’t think much of that idea — “It’s bull,” he says.

“I’m going to be a lot more competitive and a lot stronger this fall than people think,” Stewart said. “Tim Kaine is the sort of old, elite Democrat that people are tired of. There’s a change going on in Washington, and it’s being led by President Trump.”

For his part, de Ferranti doesn’t believe Vihstadt’s public support for Kaine will make a difference by the time November arrives. He sees backing Kaine over Stewart as a “low bar” for anyone to clear, given his dim view of Stewart’s politics.

“Everybody should vote for Tim Kaine, who is a phenomenal leader, and against someone who is clearly racist,” de Ferranti said.