A Virginia Square resident returned from work on Tuesday to find his house had been burglarized.

The resident, whose first name is Tom, said in a Reddit post that the suspect rummaged through his house and stole electronics and jewelry.

“Posting them here so in case you see a screaming deal on a laptop on Craigslist or Letgo, and you see that this is the guy selling it to you, then please send me a DM so I can update the police with his whereabouts,” Tom wrote in the post.

There was a bit of good news: Tom has a “pet cam” in the basement to keep tabs on his pet rabbits, and the video camera captured a relatively high resolution view of the suspect. Tom gave police a copy of the video and also posted it to YouTube for all to see. 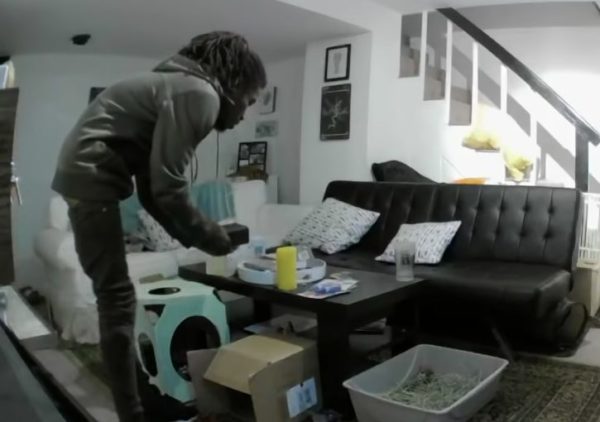 The burglary happened at some point between 12:45 and 2:50 p.m. on Tuesday, according to Arlington County Police Department spokeswoman Kirby Clark.

“An unknown suspect gained entry to a residence and stole numerous items of value,” said an ACPD crime report. “The suspect is described as a black male with dreadlocks, wearing a gray sweatsuit. The investigation is ongoing.”

Tom, who lives near the Rocklands Barbeque restaurant, suggested to ARLnow.com that the burglary was a crime of opportunity in an otherwise low-crime neighborhood — and may be a bit of a cautionary tale for other residents. After trying to force the back door open, the burglar was able to get easy access to the home via an unlocked back window, he said.

“During one of the recent rain storms when it got cooler than normal, we took advantage and opened all the windows to get a nice fresh cross breeze,” Tom said. “Only problem is I forgot to re-lock the back window after closing it.”

While Tom is asking for direct messages from Redditors who might see his pilfered belongings for sale online, police are asking members of the public to contact them directly with any tips.