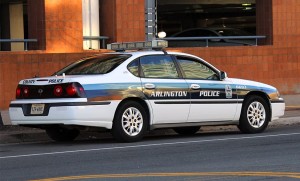 Arlington police are investigating after a woman says she was assaulted and robbed near Ballston Thursday night (Aug. 9).

Police say the woman was walking near the 3900 block of Fairfax Drive around 9 p.m. Thursday when a man came up behind her and shoved her into a wall.

The man then proceeded to rob the woman and assaulted her, though he ran off after a brief struggle. Police say the woman suffered “minor injuries” as a result of the scuffle.

ROBBERY (late), 2018-08100128, 3900 block of Fairfax Drive. At approximately 12:36  p.m. on August 10, police responded to the late report of a larceny. Upon arrival, it was determined that at approximately 9:00 p.m. on August 9, the victim was walking in the area when an unknown male suspect approached her from behind, shoved her against a wall and stole her personal property. The suspect then assaulted her, however, the victim resisted and a brief struggle ensued before the suspect fled on foot with her property. The victim suffered minor injuries. The suspect is described as a white male, approximately 40-45 years old, 5’8″-6’0″ tall, weighing 190-210 lbs., with brown hair. The investigation is ongoing.