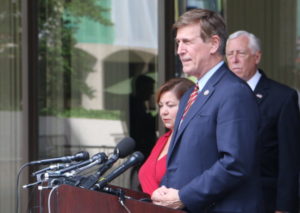 Rep. Don Beyer (D-Va.) is no fan of Trump administration, but the president’s decision today (Thursday) to stop pay raises for civilian federal employees is hitting a particular nerve for Arlington’s local congressman.

In a statement, below, Beyer called the move “dishonest” and “an attack on another class of people he does not like.”

Beyer’s office also noted that the congressman “represents the largest number of federal employees of any Member of the House of Representatives.”

President Trump’s decision to deny pay raises is a slap in the face to the hardworking civil servants who help keep us safe, care for our veterans, and faithfully serve the American people.

No one will believe his dishonest justification of a ‘national emergency or serious economic conditions,’ which is contradicted by Trump’s own commentary painting a rosy picture of the economy. This newfound concern for the fiscal prudence is impossible to credit, given Trump’s willingness to create massive deficits and determination to waste money on pet projects like his border wall. This is merely an attack on another class of people he does not like.

It is a harsh indictment of President Trump’s values that he is freezing workers’ pay to offset his multi-billion-dollar tax cuts for millionaires and billionaires.