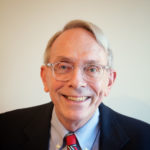 “The problems started around 7 p.m. yesterday (Wednesday), when the county’s Department of Environmental Services received word of pipe problems near the intersection of Columbia Pike and S. Frederick Street… . By 10 p.m., they reported several other water main breaks along the pike … and determined that the S. Park Drive problem was “related” to the previous breaks.”

In a tweet last week, the County’s Department of Environmental Services (DES) attempted to explain by saying:

“Arlington has some 500 miles of mains bringing water to homes, schools and businesses. As in most urban American towns, a lot of those mains have been in the ground and working non-stop since before World War II.“

It’s not as if the county government hasn’t seen this coming.

In January 2018, ARLnow reported that “County Crews Have Repaired Dozens of Water Main Breaks Since Mid-December.”

At that time, DES pointed the finger at freezing temperatures:

“When ground temperatures drop to the water main depth, the pipe material gets cold, but the water temp drops at a slower rate due to its movement…”

In May 2016, ARLnow reported that DES had boasted it had fixed “217 water main breaks in the past year.”

In January 2014, ARLnow posted another story about water main breaks. That story also highlighted the fact that “Arlington has 500 miles of water mains, 60 percent of which are 55 years or older,” with the oldest dating to 1927.

A county video accompanying the January 2014 story struck the same ironic tone as last week’s DES tweet. That 2014 video proceeded from the faulty premise that water main breaks are always “unavoidable.” The video’s message: learn to live with them. The video explains why old water mains break. Surprise: it’s because they’re old and decaying!

Freezing weather did not cause last week’s water main breaks along Columbia Pike.

The county government is simply devoting too few of our finite taxpayer dollars to replacing World War II water mains, while devoting too many of those finite dollars to projects like a new $60 million Aquatics Center.

We can and should do better in setting priorities for how our county government spends our tax dollars.

Arlington is facing this situation (at p. 25):

“[W]ater-main failure rates generally increase exponentially over time (Kleiner, 2002). One could envision a rapid increase in break rates in the future… If a break rate doubles, the economic impact is significant; one would need to double the number [of] personnel repairing the breaks.”

The county government should prepare and share for discussion with its residents a Life Cycle Replacement Cost analysis of Arlington’s water mains as recommended (at p. 44) by Dr. Sunil Sinha, Professor of Civil and Environmental Engineering and Director of the Sustainable Water Infrastructure Management (SWIM) Center at Virginia Tech:

“[T]o meet the important challenges of the 21st century, a new paradigm for the planning, design, construction, and management of water pipeline infrastructure is required.”