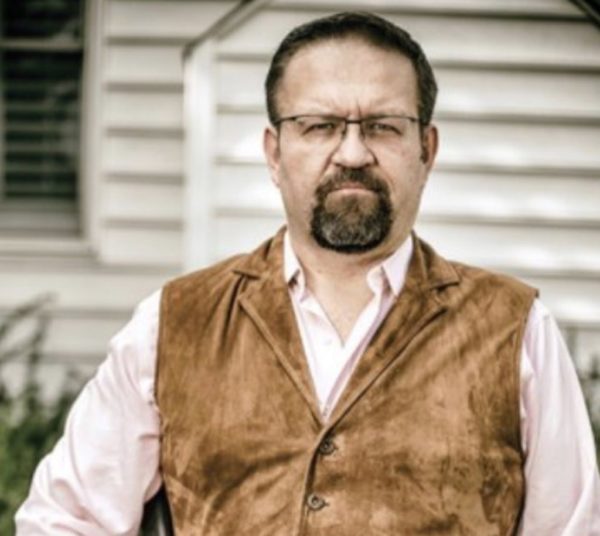 Sebastian Gorka, a former aide to President Trump fired amidst mounting criticism of his anti-Muslim views, is coming to Arlington to raise money for local Republicans.

The Arlington Republican Women’s Club announced this weekend that Gorka will be a featured guest at its Sept. 23 fundraiser, to be held at the Army-Navy Country Club. Tickets run anywhere from $25 to $250 for the evening.

Long a fixture on Fox News and other right-wing news outlets, Gorka joined the Trump administration shortly after doing consulting work for the campaign on foreign policy matters. Yet he frequently courted controversy during his time in the White House, particularly after reporters discovered his ties to far-right, anti-Semitic groups in Hungary, and he was dismissed from his post last August.

Carole DeLong, the president of the Republican Women’s Club, told ARLnow that she expects Gorka “will speak to us about his time in the White House, and the interesting subjects of his books.” Gorka’s published works include “Why We Fight: Defeating America’s Enemies — With No Apologies” and “Defeating Jihad: The Winnable War.”

DeLong added that she recently met Gorka at an event they both attended, and quickly convinced him to come speak in Arlington.

“He is a very nice and unique person,” DeLong said. “We are all so happy that he agreed.”

Arlington Democrats are considerably less enthused about Gorka’s imminent arrival in the county.

County Democratic Committee Chair Jill Caiazzo dubbed Gorka a “far-right ideologue” in a statement, highlighting his vocal defense of Trump’s travel ban targeting majority Muslim countries, in particular. She noted that her committee happens to holding its own potluck on the same day, headlined by U.S. Sen. Tim Kaine (D-Va) and Rep. Don Beyer (D-8th District), which she sees as a clear contrast between the two parties.

“Like the races on the ballot in November, it’s not a hard choice for Arlington voters who seek to reject the extreme Trump-GOP agenda, including the discriminatory travel bans championed by Dr. Gorka,” Caiazzo said. “We look forward to seeing those voters at the potluck and the polls.”

Despite Caiazzo’s criticisms, DeLong said she had no compunctions about working with Gorka, calling him “delightful to work with.”

Gorka has made headlines in Arlington once before, prompting a brief Twitter outcry when someone spotted his distinctive Ford Mustang with the vanity plate “ART WAR” parked on a sidewalk near Rosslyn’s Gateway Park.

Despite @ArlingtonVA laws prohibiting this behavior, I came across this car that had just been parked on the sidewalk at Gateway Park pic.twitter.com/UYrDwnxWos

END_OF_DOCUMENT_TOKEN_TO_BE_REPLACED

More Stories
Facebook Screwed Us and We Need Your HelpArts Focus: The Science, Data and Inspiration of Creative Genius