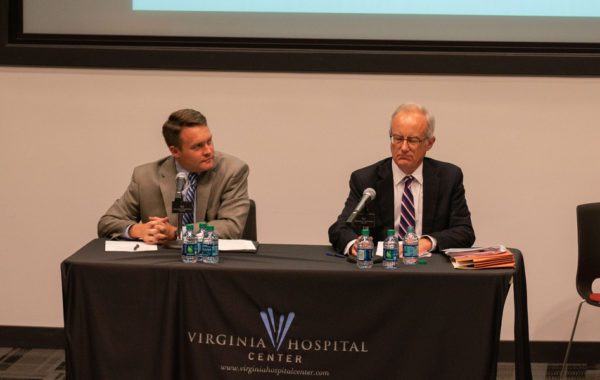 Democrat Matt de Ferranti managed to raise more cash over the last two months than independent incumbent John Vihstadt, who he’s challenging for the lone County Board seat on the ballot this fall.

But Vihstadt still has a substantially larger campaign war chest to draw upon, as the race rounds into the home stretch ahead of Nov. 6.

From July 1 through Aug. 31, de Ferranti raised just over $39,900, according to campaign finance documents released today (Wednesday). Vihstadt pulled in about $26,900 over the same time period.

The independent’s largest donation was a $5,000 check from a political action committee representing Arlington’s firefighters’ union, which endorsed Vihstadt in late July. De Ferranti’s biggest contribution was a donation of the same amount from Mark Johnson, a co-founder of the D.C. investment firm Astra Capital Management.

De Ferranti faces a formidable opponent in Vihstadt, who managed to win a pair of sweeping victories over Alan Howze in 2014, but he’s benefitted from the fundraising support of prominent state Democrats like former Gov. Terry McAuliffe and Attorney General Mark Herring. He’s also set to welcome Lt. Gov. Justin Fairfax for a fundraiser later this month.

Even still, Vihstadt looks on pace to out-raise de Ferranti, just as he did Howze — de Ferranti has raised roughly $106,100 since launching his campaign in January, compared to Vihstadt’s nearly $139,000 over the same time period.

However, de Ferranti does stand to benefit from the support of the Arlington County Democratic Committee, which is looking to return the Board to unified Democratic control. The party has only reported contributions through June 30, when it recorded having just over $101,800 in the bank.

Candidates will next deliver more details on their finances on Oct. 15.

More Stories
Crime Report: Airbags Stolen from Numerous CarsHere’s What Professionals Can Do to Keep up with the Changing Job Market