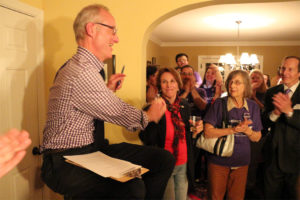 (Updated at 3:25 p.m.) The shockwaves around the re-election of John Vihstadt to the Arlington County Board last night continue to reverberate today, with many around Arlington wondering if the county is about to undergo a major policy shift.

“The streetcar is dead,” local political blogger and strategist Ben Tribbett told ARLnow.com last night at the Democrats’ election party in Crystal City. “The voters spoke so overwhelmingly tonight. There’s absolutely no way that [County Board members] Mary [Hynes] and Walter [Tejada] can win re-election if they’re running as pro-streetcar candidates next year. The voters have spoken on this now. It’s over.”

The growing chorus that the majority of the County Board — Chair Jay Fisette, as well as Hynes and Tejada — are out of touch with the voters was bolstered by Vihstadt’s margin of victory. The Republican-endorsed independent won 55.76 percent of the vote to Democrat Alan Howze’s 43.8 percent — less than his margin of victory in the April special election but still a big surprise to many who follow Arlington politics, who haven’t seen a non-Democrat win a County Board general election since 1983.

It’s that result that led Arlington County Democratic Committee President Kip Malinosky to determine that Vihstadt’s victory was not from a lack of Democratic voter turnout, but rather the issues and candidates themselves.

“At this point, I’m not prepared to say what the message [voters sent] was, I’d like to look deep into it and hear a lot more,” he told ARLnow.com last night. “Arlington is a wonderful place to live, it’s well-governed, low crime, low unemployment rate. But people are obviously unsatisfied about something, so we’re going to have to do better.”

County Board member Libby Garvey, a Democrat, threw her support behind Vihstadt before the April special election to replace Chris Zimmerman, and was forced to resign from the ACDC executive committee for it. Last night, she experienced a mix of elation and relief at Vihstadt’s home in Tara-Leeway Heights, realizing her efforts had been validated by tens of thousands of Arlington voters.

“This is a mandate,” she said emphatically. “I think our colleagues on the Board have gotten out of touch with what people want, including Democrats. It’s just really a wonderful validation of what we’ve been saying and what we’ve been thinking. I think the people of Arlington are taking back control of their county and that’s a good thing.”

Tribbett agreed, taking it a step further. He said Howze shouldn’t take the blame for the loss; instead, it’s on the Board’s own lack of trust with voters and on the local Democratic leadership.

“It’s on the County Board 100 percent,” Tribbett said.

“This is the problem with Arlington Democrats. They spent the time after they lost the special election, and here’s the arrogant response: ‘When we get more voters, they’ll just take our sample ballot, and they won’t know the issues, so they’ll vote for our candidate,'” he continued. “Their plan is to hope that people aren’t informed? Well, this is one of the most educated electorates in the country, and they just told them basically to eff themselves with that kind of strategy, to rely on them being misinformed. Gimme a break. They ought to be embarrassed.”

While Tribbett believes the Columbia Pike streetcar to be a political impossibility at this point, groups that support it say the election shouldn’t be seen as a referendum on the streetcar.

“It would be reading too much into Arlington voters’ intentions to ascribe the election of John Vihstadt to a full term on the Arlington Board over Alan Howze primarily to the debate over the Columbia Pike streetcar,” said the Coalition for Smarter Growth, in a press release this afternoon. “Streetcar opponents linked the price tag of the streetcar to general concerns over government spending and the state of the economy… [but] we are confident that the streetcar will continue to stand up to scrutiny and prove to be the best investment for the Columbia Pike Corridor.”

Tejada said he hopes the Board can “work together in a respectful manner” and “find as much common ground as possible.” He deflected questions about the future of the streetcar and concerns over his and Hynes’ ability to win re-election in 2015. Instead, Tejada championed the achievement of agreeing on the streetcar plan without sacrificing any affordable housing on Columbia Pike.

Tejada also obliquely referred to Garvey and Vihstadt’s rhetoric as “divisive,” saying many of the Board’s critics are “condensing” the issues into “sound bites.” He said he looked forward to “continue to inform details to the community, particularly factual information that it took quite a long time to get to.”

“I think this is a crossroads moment in time for Arlington,” Tejada said. “We need to decide whether we’re going to become a timid and stagnant community or are we going to continue to be bold and innovative and craft difficult strategic policies that will sustain us in the future in all parts of the county.”

END_OF_DOCUMENT_TOKEN_TO_BE_REPLACED

More Stories
NOVA Legal Beat: What to do About Coworker Pranks?Board to Consider 20-Story Apartment Building in Pentagon City