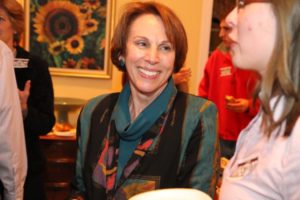 Garvey read a 15-minute statement to the committee before handing in her resignation at the ACDC’s meeting last night, which was closed to the media.

“The party’s got some thinking to do about what’s going on,” she said. “The decision they have is make is if they go ahead and continue to support elected officials who it seems pretty clearly are not representing what people want. Are we going to talk about local issues or just go lockstep with what a few elected officials say we should be doing? I hope they take some time to talk and think about it. They need to figure out what the real questions and issues are, why John won, and figure out what that’s going to mean moving forward.”

Garvey supported Vihstadt, gave $1,000 to his campaign and called his election “a victory for good government.” She has also irked rank-and-file Democrats with her outspoken opposition to the Columbia Pike streetcar.

Sun Gazette editor Scott McCaffrey, who stood outside the 45-minute, closed ACDC meeting Monday night, reported that some attendees “seemed dazed by the experience and stunned by the vehemence of Garvey’s comments.”

ACDC Chairman Kip Malinosky, who called for the hearing to remove Garvey after he reportedly received numerous complaints about her conduct, said there’s a general “sense of relief” around the committee after they weren’t forced to vote on Garvey’s future.

“People still got along with each other, people still cracked jokes,” he said. “They just realized it was one of the things we had to do. The thing is, all she had to do was endorse a Democratic primary candidate. The Arlington Democrats are not the County Board. When [streetcar opponent Democrat] Cord Thomas said he was going to run against Alan Howze, I said, ‘Welcome, come on.'” 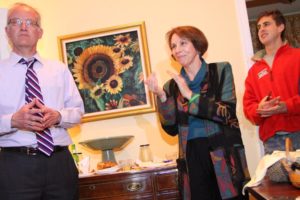 Arlington Commonwealth’s Attorney Theo Stamos — who also supported Vihstadt, a longtime friend, and plans to do so again when he runs against Howze in November’s general election — also agreed to no longer attend ACDC meetings or vote in hearings, but said she had made that decision informally in December after Vihstadt decided to run.

“[My decision] wasn’t tied to the committee’s actions against Libby,” Stamos told ARLnow.com. “I had numerous conversations with Kip, all perfectly equitable and we agreed this was the appropriate thing to do.”

Garvey said she didn’t decide to be a committee member, but all Democrat elected officials become committee members by default, once they’re elected, giving them access to ACDC data and resources. Malinosky said he’ll welcome Stamos and Garvey back after the November election if they decide to support only Democrat candidates.

Garvey said she’d be happy to come back, if the ACDC takes her, and said she only requested the meeting for the good of the Democratic Party.

“I want to be helpful to ACDC,” she said. “I understand that I violated the bylaws. I get that… There were some things I think the ACDC needed to hear. I’m not the problem, I’m a symptom. I didn’t want to make them go through [the voting process], I wanted to be helpful.”