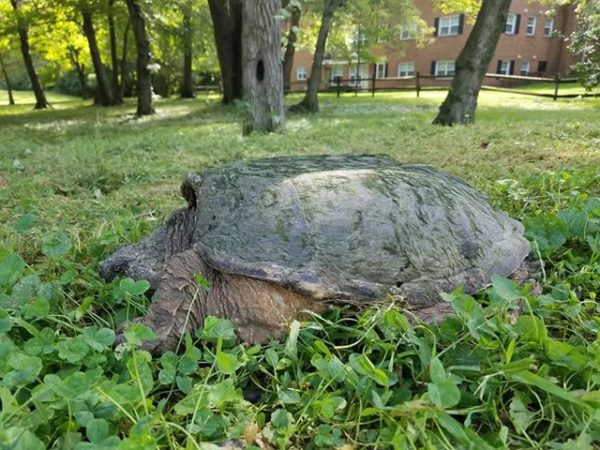 A large snapping turtle gave a few South Arlington parkgoers a surprise today (Wednesday), and animal control officers ultimately had to step in to guide the reptile to safety.

Jennifer Toussaint, the county’s chief animal control officer, told ARLnow that her office received a call around noon that the large turtle was in the street at the intersection of Army Navy Drive and 28th Street S., just near Fraser Park.

She said an officer ultimately “safely moved the snapping turtle in the direction it was heading towards the stream adjacent to the brush line near the street,” which backs up to I-395.

Toussaint added that it’s hardly unusual for her office to receive calls about snapping turtles — animal control officers discovered someone keeping one as a pet just last month, a practice she strongly advises against — and the Arlington Ridge and Long Branch Creek neighborhoods seem to be particularly popular spots for the creatures.

“Snapping turtles mate from April [to] November and travel extensively on land when laying eggs and looking for [a] new habitat,” Toussaint wrote in an email. “Army Navy Drive [and]28th Street seems to be a very specifically popular areas for them, as we have yearly calls for service for snapping turtles in the roadway injured or needing assistance ranging back as far as 2013. Most of our snapping turtle calls in Arlington come in June [through] July.”

Justin Covert, one of the people to discover the turtle, added that his girlfriend discovered another turtle in the park earlier this month, even though he’d “never seen a turtle around these parts until now.”

Should the turtle sightings continue, Toussaint wants to warn people that the reptiles have “very flexible necks, sharp long claws, a strong jaw and can act defensive when handled.”

While animal control officers may be best-suited to move the creatures off roadways, she advises that it’s “inappropriate to pick them up by their tails,” if any turtle seems in danger.

“Their weight needs to be supported and dragging them can cause cuts that can get infected,” Toussaint wrote.