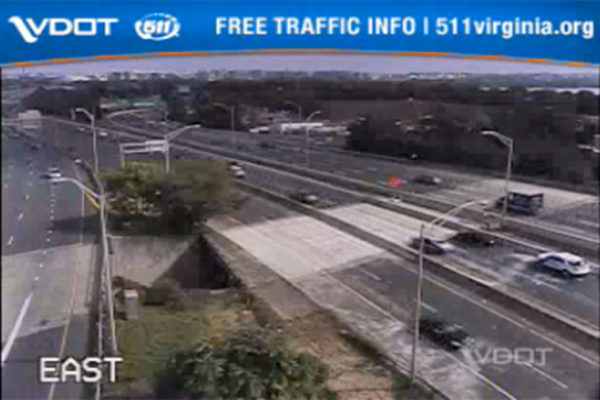 (Updated at 8:50 p.m.) A man wanted for a series of credit card and vehicle thefts has finally been taken into custody after a high-speed chase that zoomed through Arlington.

Before the chase crossed the bridge, an Arlington officer attempted but to use a “spike strip” to flatten the tires of the SUV, but Thodos managed to maneuver around it, according to scanner traffic. (The image above shows the chase just before it crossed the river.)

Officers lost sight of the SUV after crossing into the District, but the search continued and the pursuit later continued in D.C. and Maryland. Thodos, 32, was later arrested after a crash in District Heights, Md.

This is the vehicle that was being chased through Arlington on I-395 earlier today https://t.co/xTiGy6gWkW

Witnesses say Thodo was being chased by police when he crashed and was surrounded. He jumped from his window and was tackled by police. The fugitive has been on the run after escaping a barricade situation in FFX pic.twitter.com/v8g9eLkuAd

UPDATE: Alton Thodos has been arrested by the Prince George’s County Police Department in Maryland. Thanks to all the jurisdictions for assisting us with his arrest. @PGPDnews, @VSPPIO, @AlexandriaVAPD, @USParkpolicepio, and @DCpolicedept.