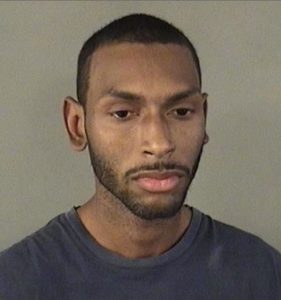 A Maryland man is now facing a slew of charges after police say he tried to lock himself in his car, then threw an officer to the ground during a traffic stop.

Arlington County Police say that 32-year-old Michael Terrance McClanahan of Clinton, Maryland first attracted the attention of officers when he made an illegal U-turn while driving near the intersection of Crystal Drive and 20th Street S. around 2 a.m. Monday (Oct. 8).

Police pulled McClanahan over and discovered he was driving on a suspended license. When officers told him to leave his car, McClanahan “refused to exit the vehicle, attempted to lock himself inside and did not comply with the lawful commands of the officers,” police said.

Once officers were able to get him out of his car, they found he was carrying a concealed weapon and decided to arrest him. As they tried to take him in to custody, McClanahan managed to lock legs with one officer, “causing both to fall,” according to police.

He’s now charged with assault and battery on a police officer, carrying a concealed weapon, obstruction of justice and driving without a license, with a hearing set for Nov. 5 in Arlington General District Court.

McClanahan is currently being held without bond in the county jail.

ASSAULT AND BATTERY ON POLICE, 2018-10080019, Crystal Drive at 20th Street S. At approximately 2:14 a.m. on October 8, officers on routine patrol observed a vehicle make an illegal U-turn and attempted a traffic stop. One of the officers had previously cited the driver for operating without a valid license and his license remained suspended at the time of this incident. During the investigation, the suspect allegedly refused to exit the vehicle, attempted to lock himself inside and did not comply with the lawful commands of the officers. Officers removed the suspect from the vehicle and placed him under arrest. A search incident to arrest located a concealed weapon on the suspect’s person. While being transported to booking, the suspect affected a leg lock on an officer causing both to fall. Michael McClanahan, 32, of Clinton, Md., was arrested and charged with Assault and Battery on Police, Carrying a Concealed Weapon, Obstruction of Justice and No Operator’s License. He was held without bond.