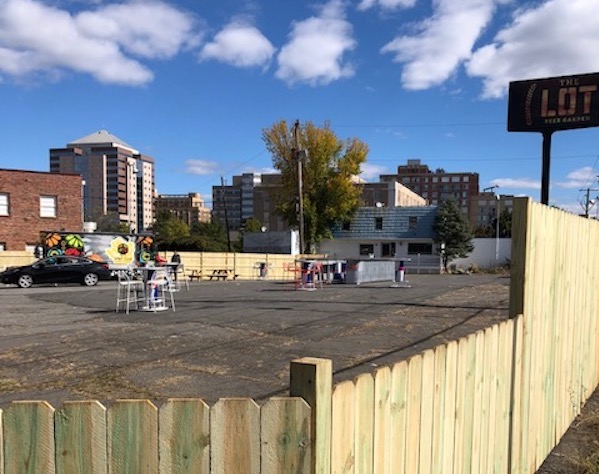 Some new details are at last surfacing about The Lot beer garden coming to Clarendon, as its owners now say they’re on course to open up the establishment next spring.

Social Restaurant Group, the company behind Clarendon bars Pamplona and Bar Bao, first filed plans to open the beer garden at a former used car lot on the corner of Wilson Blvd and 10th Street N. last March. Since then, however, there’s been scant evidence of progress at the site — that is, until a wooden fence recently went up around the property.

Social Restaurant Group co-founder Mike Bramson now tells ARLnow that he’s secured all the permit he needs to start serving up brews at The Lot, and fully plans to open for business when the weather improves a few months from now. He’d even initially hoped to throw a Halloween bash this weekend, but with rain and blustery conditions in the forecast, he ultimately decided to put those plans on hold.

“As much as we’re eager to launch it, we wanted people to have enough time to plan another Halloween event,” Bramson said. “But even with the response we got on Facebook about the event when we put it out there, we can tell people are really excited about it.”

Bramson says he’s still hammering out the specifics about what sort of beers will be on offer at The Lot, but he expects there will be “a vast variety, from Belgian to German to local craft beers.” He also hopes to serve up frozen cocktails and some wine, with the Rebel Taco food truck parked on the property to satisfy patrons’ food cravings.

“The space is huge, so we’ll have a lot of games as well, from cornhole to giant Jenga,” Bramson said.

Bramson is well aware that people are anxious for the beer garden to officially open, and he attributes the lengthy delays to some unexpected challenges securing the necessary building permits from the county.

He’d originally hoped to transform the small, existing building at the parking lot into an indoor seating area, necessitating permits for the otherwise simple project. But Bramson says he likely won’t follow through with those plans, given just how long the whole process took, and the uncertainty surrounding his lease.

He notes that The Lot is on a month-to-month lease on the property, as the whole area — including the nearby Silver Diner and Joyce Motors car lot — is slated to be redeveloped someday into a new mixed-use building. But Bramson can’t be sure exactly when that might move ahead, so he’s simply plowing ahead to open up the beer garden in whatever time he has left.

“We figured it wasn’t worth it and it didn’t make sense to build out this huge structure when someone else could just knock it down in a year,” Bramson said. “But we’re banking on the fact that it will be a longer than a year… so we’ll just keep it simple, and if we find out in future that we can stay longer, then we already have permits to do the construction we originally planned.”

In the meantime, Bramson says he may try to bring in some tents and host some sort of other “pop-up parties” at The Lot this winter, to start introducing the neighborhood to the new space.

“But you never know in this area whether it’ll be warm or cold on any given day, so it’s tough,” Bramson said.