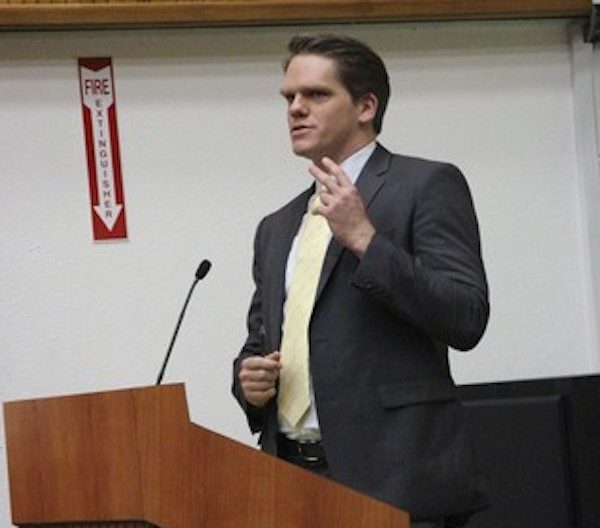 Commonwealth’s Attorney Theo Stamos (D) announced earlier this month that her office would no longer seek cash bonds for people accused of most minor misdemeanors, casting it as a bid to ensure that some defendants won’t sit in jail simply because they can’t afford to pay up as they await trial. But several public defenders, who are responsible for representing the area’s poorest defendants, say Stamos’ move prompted immediate confusion and derision in their circles.

Brad Haywood, the county’s chief public defender, dubbed Stamos’ announcement trumpeting the changes as “misleading,” arguing “her new policy will do almost nothing (and maybe nothing at all) to change the status quo in Arlington.”

“It seems to do little more than pledge to follow the law as currently written,” Haywood told ARLnow via email. “I don’t know if it’s my place to wonder why this policy was styled as ‘bail reform,’ although the lack of substance suggests something other than an interest in institutional change. Suffice it to say, this is not what bail reform looks like.”

Others around the region were even more pointed in their criticism. Andy Elders, the deputy public defender in Fairfax County, dubbed the new policy “so limited as to be meaningless.”

“It sounds like Ms. Stamos put out a press release to try to head off a more progressive challenge for her job,” Elders wrote in an email, in a nod to Stamos’ likely bid for re-election next year. “This is not real criminal justice reform — it’s a cynical PR move.”

For her part, Stamos says she’s accustomed to criticism from defense attorneys — the criminal justice system is an adversarial one, after all. But she believes her bail changes strike the right balance between helping some indigent defendants, and ensuring that victims and witnesses aren’t summoned to court, only to find that the defendants involved have fled the area or been arrested elsewhere.

“It’s never going to be enough to satisfy the public defender, but that’s not my concern,” Stamos said. “My concern is not satisfying their view of my office, but what the voters and residents of Arlington County think of how my office is being run.”

But Haywood and Elders say the problem with Stamos’ proposal is not simply that it’s too limited — rather, they worry it won’t result in any changes whatsoever.

Stamos’ announcement noted that she would only seek cash bonds in cases involving drug dealing or drunk driving, and she specified that she envisions the policy change mainly impacting people accused of things like larceny, trespassing, disorderly conduct or even prostitution.

Yet Haywood points out that “cash bail in our current system is inappropriate in the vast majority of misdemeanor cases — not just ‘most’ of them.”

“This is usually a simple decision in a misdemeanor case,” Haywood said. “Unless there’s something more to it, those people are supposed to be released without paying money.”

Elders noted that he doesn’t generally practice in Arlington, but called it “extraordinarily rare” for prosecutors to seek cash bail in “non-violent, non-DWI misdemeanor cases.”

Stamos vigorously disagrees with those assessments, claiming that the public defenders “should certainly know that there are any number of instances” in which even people accused of “low-level misdemeanors” are held on cash bonds.

“My point is to avoid having someone sitting in jail on a $1,500 secured bond because they can’t post $150 to get out on a trespass charge,” Stamos said. “Clearly, many people on low-level charges are released on supervised release or personal recognizance, but many others are being held on a secured bond.”

But Elders also notes that Stamos’ policy is narrow enough that people accused of even minor felonies like grand larceny, credit card fraud and drug possession can still be held on cash bond. Yet Stamos points out that the system does offer judges the discretion to evaluate a defendant’s finances before requiring a cash bond, and she feels the law still obligates her to “consider risk of flight and danger to the community” when asking for a bond in most cases.

Stamos has argued previously that state lawmakers need to be the ones to make more substantial reforms before she can take more substantial action. The public defenders, however, are skeptical, arguing that she could rely on the recommendations of “pretrial risk assessments” prepared by county workers, then vastly expand her reliance on Arlington’s robust pretrial supervision program to allow for more people to be released before they head to court.

“Virginia already has a validated, reliable pretrial risk assessment instrument that was designed to help guide bail decisions,” Haywood said. “It is not given much weight in Arlington, even though it is available. Bail reformers want it to be given weight — in fact they want it to be prioritized. That’s because it is reliable, and following its recommendations consistently would dramatically reduce the pretrial jail population.”

Stamos counters that Haywood is “ill-informed” about how closely her office relies on risk assessments in making bond decisions, describing it as just one piece of a complex set of factors her prosecutors consider. And while she’s also quite pleased with the county’s pretrial services staffers, who help monitor how defendants are holding down jobs or complying with drug treatment programs, she believes the system would need to be much stronger if the county were to move away from cash bail in any substantial way.

“That takes money, that takes resources, that takes people,” Stamos said. “It’s not paid for by itself, so that’s what has to be in place in a more robust way if you’re going to eliminate secured bonds.”

Haywood is puzzled by that assertion, though, noting that the county is “much better equipped to monitor pretrial defendants than most other Virginia jurisdictions.”

“Honestly, this is about as close to a utopian ideal as you get in American criminal courts,” Haywood said. “Most communities don’t have such incredible services available to pretrial defendants.”

Allison Carpenter, an assistant public defender in Arlington, agrees with that assessment, noting that pretrial services are used “quite heavily” in the county already. Furthermore, she says eliminating cash bail wouldn’t simply inundate the pretrial services division with people they haven’t worked with before.

“Many of the defendants in our jurisdiction are ordered to comply with pretrial services in addition to posting a cash bond,” Carpenter wrote in an email.

At the end of the day, Haywood hopes that Stamos is serious about her pledge to work with state lawmakers to achieve more substantial reforms, hoping that Stamos’ announcement was “merely a conversation starter, and not the extent of [her] commitment on this important issue.”

Stamos says she is indeed giving the issue thoughtful consideration. But, even while taking flak from her colleagues, she refuses to embrace any reform that she deems too rushed.

“The discussion about bail reform has to be done down in the weeds,” Stamos said. “It’s not enough simply to say, ‘Cash bail: wrong. Secured bond: wrong.’ That’s not wise.”