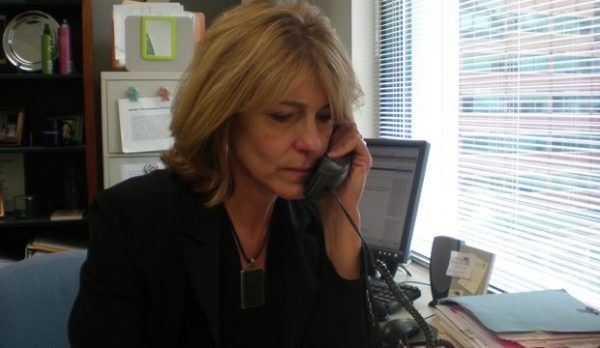 Arlington’s top prosecutor now says she’ll no longer seek cash bail for people accused of most low-level misdemeanors, in a bid to avoid jailing people simply because they can’t afford to pay their bond after they’re charged with a crime.

Commonwealth’s Attorney Theo Stamos, a Democrat, announced Thursday (Nov. 1) that her prosecutors will now only seek cash bonds in cases involving drug dealing or drunk driving. She added that her office will simply describe the facts of a defendant’s case and any prior criminal history, and leave it up to a judge to decide the circumstances of any pretrial release.

Stamos previously attracted some criticism on the issue of bail reform, after nine state lawmakers from around the area wrote to her in June to urge a wholesale overhaul of the county’s system. She dismissed that letter at the time as “misguided” and “silly,” arguing that the General Assembly needed to act to change state law before she could make substantial changes.

Stamos told ARLnow that she remains convinced that she “can’t reform bail statutes on my own,” and said this latest change was the result of her own research over the last two years or so, not any outside pressure.

“This is a much more complicated issue than simply saying, ‘Let’s do away with cash bail,'” Stamos said. “This has been a deliberative process, and I wanted to have a lot plans in place before doing anything.”

Stamos expects that the change will mainly apply to people accused of misdemeanors like disorderly conduct, trespassing or obstruction of justice. She says those charges often land on the county’s poorer residents, and that “results in people sitting in jail because they can’t afford $150 for a bond payment.” Instead, Stamos says it will now be solely up to judges to evaluate whether people charged with those sorts of offenses represent a flight risk or a danger to the community before setting a cash bond.

“The court has to make the decision anyway, and we’ll give the court the opportunity to understand what the facts are,” she said.

But the change still doesn’t sit well with Del. Jennifer Carroll Foy (D-2nd District). Though she represents Prince William County in the legislature, she’s spent years as a public defender in Arlington, and has introduced a host of legislation to reform the state’s criminal justice system during her brief time in Richmond.

Foy notes that leaving bond decisions up to judges can leave the question of pretrial release subject to the same “implicit bias” that often lands low-income defendants of color in jail under the status quo. She’d much rather see Stamos move to the same system adopted by other states, which relies entirely on pretrial risk assessments to determine the conditions of a person’s release.

“For most misdemeanors, absent a glaring issue, those reports recommend releasing them,” Foy said. “I appreciate that she’s willing to have the conversation, and it’s a good start in the right direction. But I don’t see a hard and fast commitment being made here.”

Stamos says she’s reluctant to embrace more wholesale cash bail reforms, as she fears doing so would cripple a key funding source for the very staffers who monitor people once they’ve been released from jail. She points to New Jersey, in particular, as a state that’s made major cash bail reforms and run into such problems.

“If you don’t properly fund a robust pretrial service, you’ll have more people held without bond and who won’t get out at all,” Stamos said. “I can’t do away with cash bail by myself, because I can’t fund pretrial services. I have no ability to direct funds, and neither does the sheriff [who manages the county jail].”

Yet Foy believes Stamos is “conflating” the issues of pretrial services and cash bail reform. She argues that communities should indeed invest more money into such services, but she hasn’t seen nearly the same one-to-one relationship between ending cash bail and localities suddenly needing to hold people in jail without bond — after all, incarcerating people requires money as well.

Overall, however, Stamos is urging lawmakers like Foy to find a legislative fix and pass some sort of cash bail reform when the General Assembly reconvenes in a few months. Local Del. Patrick Hope (D-47th District) said he’d certainly be willing to do so, in a statement released alongside Stamos’ announcement.

“Theo continues to be a leader in the criminal justice reform movement,” Hope wrote. “I fully support her efforts today and look forward to working with her and others on the issue of bail reform when we convene in Richmond.”

Foy says she fully plans to introduce more legislation on the topic this year, and hopes to work with people across the criminal justice system to build a bit more support than it garnered in her first session in Richmond this year. But she also urged prosecutors like Stamos not to be content with waiting on the slow advance of legislative progress when they can act now.

“Virginia is in a position to lead change on this,” Foy said. “But they don’t have to wait for us to change things legislatively. Commonwealth’s attorneys have best practices they can implement in their own offices, and they can reduce the impact on minorities and the indigent right now.”