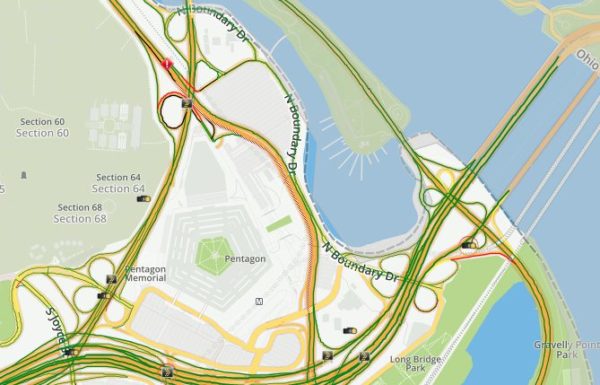 (Updated at 9:15 a.m.) Southbound Route 110 at Boundary Channel Drive, near the Pentagon, is currently closed due to a crash.

The crash involved two dump trucks, according to initial reports, which were echoed by a tipster who works at the Pentagon.

“Apparently a dump truck ran smack into the rear of another dump truck,” he said. “The front end of the truck was severely damaged.”

Later in the morning the Arlington County Fire Department confirmed that a pair of dump trucks were involved, noting that firefighters remain on scene to deal with fluid leaks. Two minor injuries were reported.

Units requested at 7:36am for accident between 2 dump trucks on SB 110 at Boundary Channel Dr. Two patients transported both with minor injuries. Units remaining on scene while leaking fluids are contained. Expect continued delays in the area. pic.twitter.com/EVZO7QjQEn

Traffic is light on the day before Thanksgiving, though the closure does affect a major commuter route at the height of rush hour.

All southbound lanes are currently shut down possibly through the morning rush hour. Seek alternate routes.