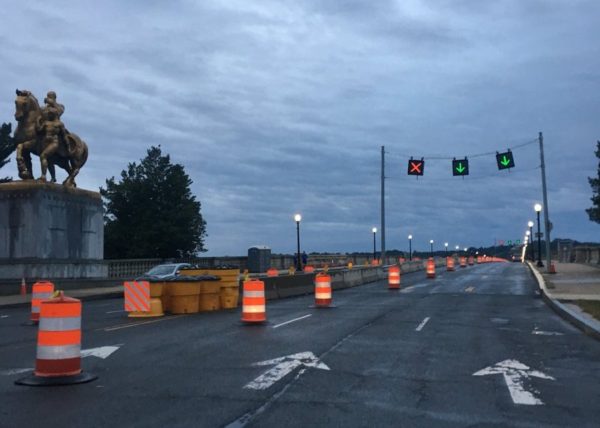 The Arlington Memorial Bridge is now set for a second full shutdown next weekend, as the lengthy rehab work on the aging structure inches forward.

The National Park Service announced today (Tuesday) that the bridge will be completely closed to drivers, cyclists and pedestrians starting at 9 p.m. next Friday (Dec. 7) through 5 a.m. the following Monday (Dec. 10). The NPS commissioned a similar shutdown in late September, and says another could be on the way in January.

Workers recently reduced the bridge down to three traffic lanes from its original six to allow for construction work as part of a $227 million effort to shore up the Potomac River crossing. Planners believe the work is necessary to avoid a complete shutdown of the Memorial Bridge in the coming years, and they expect work to continue through 2021.

“We’re closing the bridge to keep everyone safe,” Acting NPS Superintendent Blanca Alvarez Stransky wrote in a statement. “We need your cooperation in observing these closures. If anyone enters the work area during the closure, it will increase the amount of time we need to complete the work.”

The NPS is advising anyone who normally relies on the bridge to seek alternate routes next weekend, and even suggesting that boaters “approach the bridge with caution and avoid the area near its center span.” According to a release, workers plan to use the shutdown as a chance to “install a temporary support structure under the middle arch of the bridge” and “begin to remove steel from the center span of the bridge.”

Once the closure is over, the NPS says the bridge will return to its current, three-lane traffic pattern, with one eastbound lane, one westbound lane and a reversible third lane to match the direction of rush hour traffic.

The park service expects that traffic pattern will last until construction is over, and is also warning of an additional “limited number of full bridge closures on weekends and occasional, short full closures of the bridge at night.”