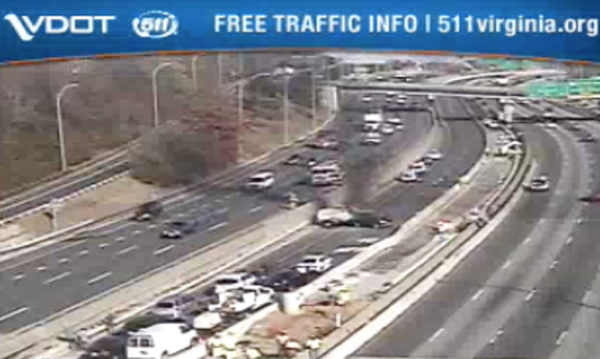 One of the vehicles involved in the crash caught fire, sending heavy black smoke and a column of flame into the air.

Firefighters are on scene and were able to quickly extinguish the fire. At least one injury has been reported.

Two left lanes of both the north- and southbound main lines of I-395 are blocked by the emergency response.

Update at 10:55 a.m. — Units are starting to clear the scene but the HOV lanes will remain shut down for an “undetermined amount of time”

#Alert: Units on scene of vehicle accident in HOV lanes of 395 N before exit 8B. Vehicle on fire has been extinguished. Crews assessing 1 patient. Please slow down & move over for responders working on highway. Expect delays on 395NB

Maybe it shouldn’t come as a surprise that there are similarities between being a judge in a courtroom and an actor on stage. “It’s all really about trying to understand…

With my final Modern Mobility column I’d like to look back at the last few years and look ahead to the next few.